Bush Hog. Brush Hog. Bush-Wacker. Brush Bull. A long list of rotary cutters with tradenames that state exactly what they are intended for. But Bush Hog was the first.

It all began in 1951, when a new rotary cutter was demonstrated to a group of farmers. When one exclaimed, “That thing eats bushes like a hog,” the name Bush Hog became synonymous with the Selma, Ala. manufacturer whose reputation for quality and performance continues to this day. Prior to the introduction of rotary cutters, farmers used hay cutters to clear farmland but left the larger bushes that inevitably sprouted each year to a team of day laborers (as many as 30 or 40), who used hand hoes to dig the brush out. Talk about labor savings.

The first Bush Hog Model 12 retailed for $320 and was produced at the rate of one per week. Today, Bush Hog equipment, including backhoes, boom mowers, hay tedders and rakes, post hole diggers, loaders and even zero-turn mowers, are marketed through a network of some 1,800 dealers across North America. 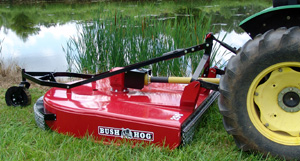 The model 296 we tested is a 6-foot diameter single spindle medium duty cutter with two free swinging blades. It is designed to be run on tractors having at least 45 horsepower at the PTO (power take off). The cutter weighs approximately 1100 pounds, so even past the horsepower restriction, you don’t want be running this on a small frame tractor. Our test tractor was a John Deere 5410, which produces 65 PTO horsepower and we found it had plenty of grunt to mow heavy grass, corn stalks and brush up to three inches in diameter – at least as long as we kept the front 2 inches lower than the rear. The discharge at this tilt setting was far from fine, but when we evened out the level to get finer shreddings, you could feel the power requirement dramatically increase. In that vein, Bush Hog rates its gearbox at 130 horsepower, so you get the idea the more power the merrier.

Checking out the owners’ manual, the maintenance required on the 296 is simple: grease the u-joints, wheel bearings, wheel pivots, driveline guard, and PTO shaft, add EP80W-90 gear oil as needed, and check the blades for uneven wear. And those blades are easily changed from the top, though you’d better have a big torque wrench handy as the bolts need to be torqued to 450 ft/lbs. 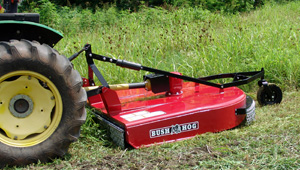 A slip clutch is included, and it goes without saying, in the field these must be checked at least every 30 days. You don’t want to become another story of driveline damage because a slip clutch failed. As for the cutter in action, the round blade holder allows the 296 to ride over stumps and immovable objects.

The Bush Hog 296 is a well designed, time tested and proven cutter that is sure to give even the most discerning user many years of service. With a street price in the vicinity of $3,000, it is not cheap, but with the Bush Hog 296, you certainly do get what you pay for. With a limited one-year manufacturer’s warranty and a limited five-year gearbox warranty, we say make ours green, as Bush Hog products are available in major manufacturer colors.