Quality. Efficiency. Sustainability. All in one round bale 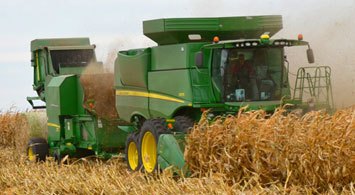 A combine is one of the most economically important labor saving inventions, allowing even a single operator to efficiently harvest a wide variety of grain crops. The round hay bale is another important farming innovation, and is widely accepted as one of the most efficient methods of densifying biomass. So why not combine harvesting and baling (which can be a two- or three-pass operation) into one operation, or pass? Until now, it was the necessity of stopping the harvesting process to produce a bale that would be completely counterproductive to the costly combine’s inherent mission.

Specifically a green-on-green solution, the SPRB System begins with a John Deere S-Series ProDrive Combine, a five-model series ranging from 295 to 543 horsepower. For the baling operation, a John Deere 569 standard round baler is used. The 569 produces round bales that are 5’ wide and up to 6’ tall. Positioned in-between the combine and baler is the SPRB System, with the spread, collect module attached to the combine hitch and the accumulator to the front of the baler. The entire system can be attached or detached in five minutes or less.

So, how does the SPRB work? Material Other than Grain (MOG) is propelled by the straw chopper into the spout which directs the flow into the accumulator hopper. The spout gate can pivot up and down to either deflect the flow to collect or spread. To make bales, three sensors monitor MOG levels in the accumulator hopper. When the third sensor is triggered, the baler and feed system engage, with the conveyor feeding the MOG into the baler evenly using a specially designed roll system. When the bale reaches the desired size, the baler wraps and then ejects the bale. Meanwhile, the process repeats without the combine having to slow down or stop. 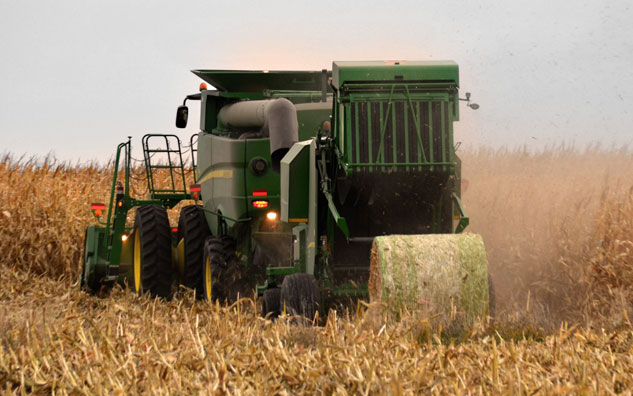 Powering the baler is a hydrostatic engine driven (combine) pump that drives a high torque bent axis motor, while the conveyor and feed rolls are driven by a gear pump that runs off the straw chopper. A round baler is chosen as much for the 8-10,000 lb. weight advantage as for the lesser PTO horsepower requirements, and with the SPRB System, the baler is off while the accumulator is filling.

Beyond the obvious benefit of being able to go to a field, start harvesting, and automatically have bales come out, the SPRB System has other advantages. In a typical second or third pass baling operation, the grain harvesting takes place first. In the case of a second pass operation, the baling is done next and separately. In the case of a third pass operation, a raking is done in-between the harvesting and the baling. Not only do these these additional tasks take more time, but the material between passes lands on the ground. Ash content (dirt) from second and third pass operations is typically 12% – and as much as 20% if the operator isn’t paying attention – meaning for every 100 bales, 12 could be dirt. That’s a lot of time and effort going into non-productive use. 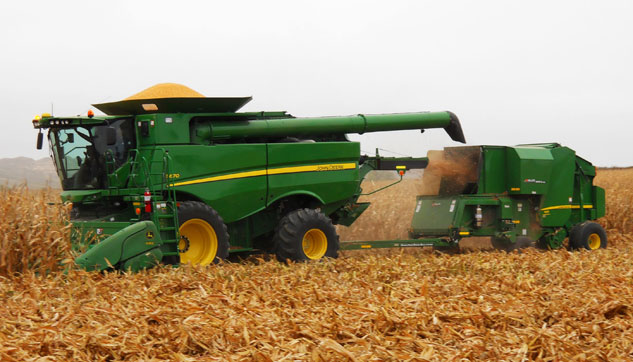 With the SPRB System, everything that goes through the combine is captured without ground contact. Not surprisingly, ash content is much lower, typically running 2.5% to 3.5%. And with corn, stock bales running through a 569 baler average 1,450 lbs. With the SPRB System, density goes up, and the bales average 1,750 lbs. The SPRB System’s bales also have higher percentages of cobs and husks so the feed quality is better than with traditional corn stalk bales. Because of the greater content of digestible nutrients, SPRB bales trade at a premium.

In today’s ultra-competitive agricultural environment, higher yields are the name of the game and part and parcel of that equation is crop residue, which impacts the next crop to be harvested. Studies have shown that residue removal rates of 20-30% can increase corn yields by 3-9%. And by taking some of this material off of the ground, ground temperatures are higher earlier in the spring, there is better seed to soil contact for planting, and there is less nitrogen tie up.

If you’re wondering how the operator, who is busy harvesting crop, can possibly keep an eye on another operation. The SPRB System has this worry under control. Three cameras monitor operation from the baler, spout and hitch, and give the operator complete visibility. With the SPRB’s automatic operation, construction designed for years of reliability, and touch screen monitoring of baling functions, harvesting and baling can no longer be considered incompatible operations. 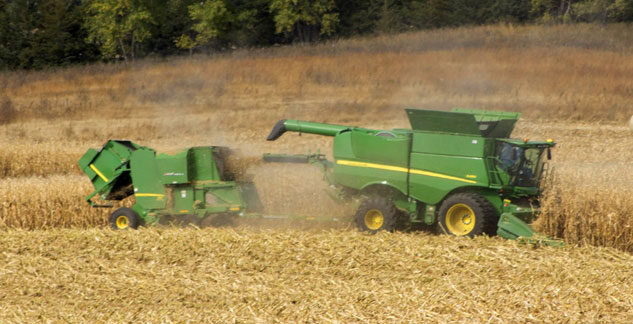 The SPRB System has proven effective on corn, wheat, barley, rye, small grain straw and soybean. At the John Deere Media Event held in Milwaukee this past August, Hillco’s Lenny Hill was on hand for the SPRB unveiling. Hill told Tractor.com that he has not yet found a crop that couldn’t be baled by the SPRB System. We asked how the heavy baler felt to the combine operator and were told the system pulls and trails quite nicely. Later we were shown a video complete with testimonials that affirmed the same.

Hill summed up three major areas of benefit to be, efficiency of collection, quality of residue, and sustainability. Hill told Tractor.com that because the SPRB System collects all the material flowing through the combine, a lot of fine material that would be lost using a traditional baler becomes part of the tightly packed bale. This means several hundred more pounds of highly digestive nutrients in each bale with the resultant material grinding at a 2:1 ratio over conventional stock bales.

The Hillco SPRB System reduces the number of field passes to get to a high quality of feed stock while minimally impacting harvesting operations. The system saves time and resources, leaves behind a high percentage of nutrients, and opens up the possibility of added revenue through the sale of bales that trade at a premium. For the agricultural customer focused on maximizing resources and return on investment, the Hillco SPRB System could just be that next farm “must have.”