Get ready for winter 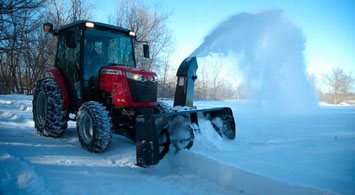 While snow may not yet be flying in your neck of the woods, parts of America and Canada have already experienced first touches of winter. For cold weather transferees or those moving into new digs, now is a good time to consider what your snow removal options are. But which implement or combination is right for you? Read on to learn more. 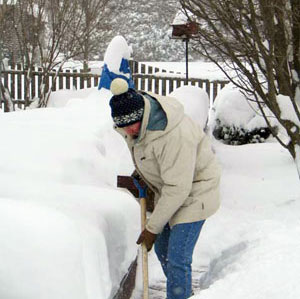 This simple marvel dates back to Neolithic and Early Bronze Age Britain where ox scapula (shoulder blades) were used as tools to move rocks and soil. Chances are these primitive tools were also used to move snow. But who really wants to shovel? Aside from the physical workout, studies published in respected publications such as the American Journal of Cardiology show that risks of ischemic heart disease deaths increase more than 20% following a heavy snowfall. And then there is the time quotient: who in today’s harried schedules has room for this tedious method?

Walk-behind snow blowers are an option, but the manhandling required can be almost as great a workout as using a shovel. ATVs, trucks and tractors powered by internal combustion engines are better candidates, with the machine providing the power leaving the operator to control the operation using their brains and not brawn. For this article we’ll focus on snow removal using a tractor.

Even most entry-level tractors have an option for a front mounted blade. At that price point, these generally don’t angle and require some effort to be raised and lowered – though nowhere near the energy exerted shoveling. Moving up the tractor chain where hydraulic power is available, powered functions such as raising and lowering the blade and angling become possible.


And since a blade has no moving (rotating) parts, it is one of the most cost effective methods of snow removal. It does require though some kind of hitch to attach the blade to the tractor which adds some cost. But an added benefit of a front blade is that it can be used to spread and level materials such as dirt or gravel.

These run off the three point hitch (3PH) and therefore don’t require an additional hitch, making a rear blade even more economical than a front blade. We routinely see mass-produced 3PH rear blades retail for as little as $300, but don’t expect hydraulic angling for that price. Instead the operator needs to climb off the tractor and manually adjust the angle. Hydraulic angling requires a power behind outlet and hydraulics incorporated into the rear blade assembly. And while a front blade has the advantage of not requiring the operator to constantly look rearward, use of a rear blade dictates a large amount of rearward neck craning.

A front end loader (FEL) is one of the most handy, back-saving inventions ever made. In wintertime, a FEL can be a multi-function implement, taking care of tasks from snow removal to the transporting of wood for heating. A FEL though doesn’t angle, and while being used for snow removal, will fill up. This means snow will begin to spill over the sides and top, requiring the operator to stop frequently, raise the bucket, turn the tractor, dump the load and then swing back and return to the plowing position. But while blades have limitations as to how much of a pile they can push (where the snow accumulates and the roadway starts to narrow), a FEL can transport snow to locations further away. A not-so-good thing FEL buckets are really good at is cutting long strips of sod from lawns butting up to driveway edges. Clearing snow using a FEL will have most operators doing a few springtime lawn repairs.

There are a lot of advantages associated with front-mounted snow blowers. There is the ability to shoot snow over embankments, cut through heavy (deep) snowfalls, and adjust chute direction to counter crosswinds. Disadvantages would include cost. Not only does a front snowblower require a hitch assembly, but it requires hydraulics to raise/lower and rotate the chute, as-well-as a front power take off (PTO) to drive the impeller(s). 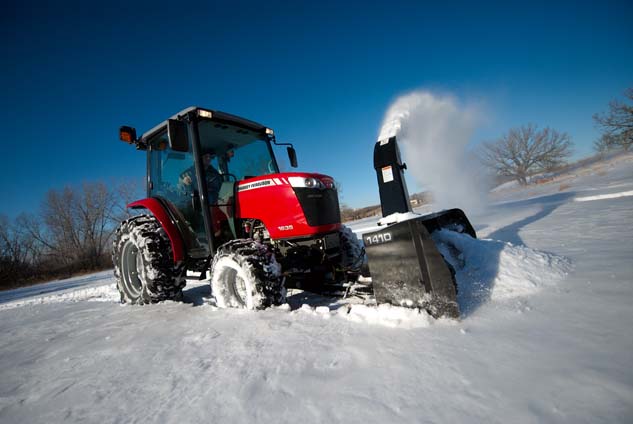 A not-so-good thing snow blowers excel at is shooting objects such as gravel in machinegun fashion though gravel drives are challenges for all snow removal methods. If the locale is a snowbelt that experiences heavy accumulation, then a base of snow between the gravel and the blower can effectively counter machine to gravel contact, but in locales that experience lesser snowfall amounts, loose gravel can be a safety as-well-as annoyance issue. One limitation of a snow blower is when a wall or corner such as created by a garage front is encountered. Then a windrow or pile will be left, requiring some shoveling or a machine combination we’ll cover below.

These blowers work off the machine 3PH and are driven by the rear PTO. As such, they are much more economical than a front-mounted blower. As with a rear blade, the operator is required to crane their neck rearward to see what is going on. But a rear blower is positioned closer to the centerline of the rear wheels and thus is less prone to washboarding which can be an advantage clearing gravel drives.

As mentioned above, a combination of implements might just be the better choice. For example, a front-mounted snowblower with a rear blade is a quite common combination. Then the operator can let the blower do the bulk of the work, but when a blocked in condition such as against a garage or wall is encountered, they can do a 180 and let the rear blade clear the snow against the obstacle. Another combination that works well for those heating with wood or having other needs for a FEL, is a rear blower/FEL combination that allows the loader to remain installed and ready to use. 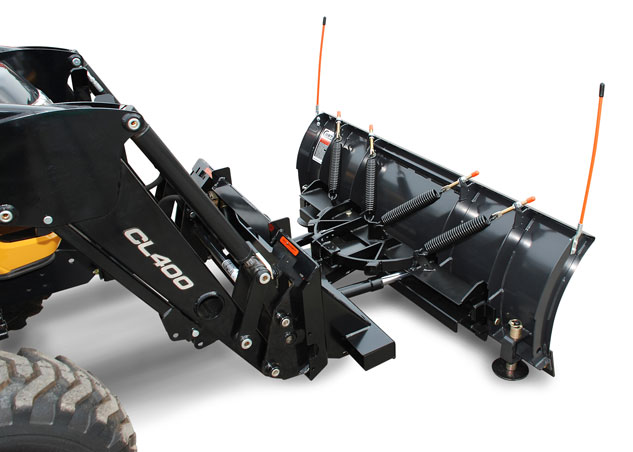 An interesting combination we are starting to see is a front plow mounted to a FEL. This can be as simple as a clamp on unit, or one that hydraulically angles. And for those with a requirement to apply salt or sand, rear spreaders in conjunction with any of the front snow removal implements can handle the demands of those extra slippery conditions well.


So which method of snow removal is right for you? That would depend on your budget, other wintertime needs such as a readily available FEL, preference for facing rearward or forward, and even the surface material to be cleared. We at Tractor.com admit an inclination towards a front blower in combination with a rear blade, preferably controlled and monitored within the climate controlled environment of a heated cab. So what do you use and prefer? Drop us a line and let us know what works for you and why.