The evolution of the subcompact tractor continues 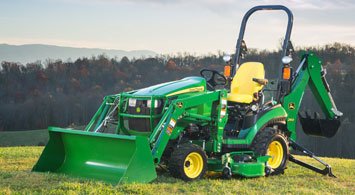 While Kubota is credited with the creation of the subcompact utility tractor (SCUT), John Deere answered with its 2210 in 2003 which led a new generation of green and yellow fans. Improvements were made with the unveiling of the 2305 in 2006 and then the all-new 1000 Series (1023E and 1026R) in 2011. In December of 2011 we were so impressed with all the changes incorporated in the 1026R that we awarded it Tractor of the Year.

Late last year we heard rumors of a new 1000 series model. On the John Deere website, forum members located operator’s manuals for the 1025R well before the official launch. Immediately they pointed out that the new model had a – gulp – decrease in horsepower. Was the 1025R an in-between model below the 1026R and above the 1023E? But then we learned that the 1025R was indeed a replacement for the 1026R and that though the gross engine horsepower was down 1.3 (23.9 vs. 25.2), the horsepower at the power take off (PTO) remained the same (18). With that knowledge and the announcement that Deere would offer a factory installed loader backhoe (FILB) package, we anxiously awaited the opportunity to get behind the wheel and see if that diminished horsepower was noticeable.

The basic 1025R FILB package comes with the 1025R tractor, which includes a H120 premium loader and 260A curved boom backhoe. The option list is small, with only a canopy, mid-mount mower (MMM), bucket sizes and more work lights for the owner-to-be to consider. Other than that, the 1025R is a fully-loaded tractor ready to “move a mountain one bucket at a time” (taking the marketing slogan from the 2210 predecessor’s brochure which is certainly still applicable today).

First the specifications. The 1025R is designed and manufactured in Deere’s state-of-the-art factory located in Augusta, Ga., though still powered by a Yanmar diesel. And that is a good thing. Yanmar small diesels are known to be some of the most reliable powerplants available. The all-new 3TNV80 three-cylinder has been designed to achieve EPA final Tier 4 emissions compliance using indirect injection and advanced technologies to reduce nitrogen oxides (NOx) and a particulate filter to reduce PM (exhaust soot). The 68.1 ci mill has an operating range from 1500 to 3370 rpm with PTO rating coming at 3200 rpm. Maximum torque is rated at 40.7 lb./ft. Fuel consumption is rated at 1.4 gal./min. at full load.

Power from the 3TNV80 is outputted to a two-range hydrostatic transmission that in our opinion is controlled by one of the best and most ergonomically engineered twin pedal arrangements available. Control over the entire forward/reverse speed range is well modulated. Cruise control is standard and engaged by a hand control. Disengaging the cruise function is as easy as stepping on the brakes or pressing on the hydro pedal. Hydraulics are delivered through an open center gear pump flowing 2.8 gpm to the power steering and 3.5 gpm to implement needs (6.3 gpm total). Position control allowing the operator to return a rear three-point hitch (3PH) implement to the same position time after time is standard, though while the backhoe is installed, the 3PH lower link arms are removed. The hitch meets Cat I standards, though the lift height is limited due to tire/tractor height. Most 3PH implements will work without any problems, but implements such as post hole diggers (PHD) might require a staged auger. 3PH lift capacity is rated at 681 lbs at the industry standard of 24” behind link arms.

As befitting a fully-loaded tractor, many operator niceties and conveniences have been built in to the 1025R. The seat is deluxe with suspension and flip-up armrests, the steering tilts for convenience, a tool box is included (FILB models have this positioned rotated 90 degrees from non-FILB models), the lighting package is deluxe (two front halogen and two fender mounted lamps), and the rollover protection system (ROPS) is foldable for parking in sheds/garages with limited headroom. Controls are all color coded have been ergonomically positioned for comfort during long hours of use.

Peering down over the sloped polycarbonate hood, the operator view over the non-curved boom loader (why has Deere gone back to the square frame loader?) and front bucket is quite good. Standard bucket size is a 50” which is a good all-around size, though we might opt for a wider bucket if lighter material tasks such as mulch will be the predominate use. Loader response isn’t 2520 quick, but not bad for a system flowing 3.5 gpm. Max lift height is 71.2” with a lift capacity of 836 lbs. Dump clearance is 54” and dig depth is 4”.

Swivel the operator seat (yes, the seat swivel mechanism is a vast improvement over the earlier 2210/2305 designs) and the 260A is ready to trench or dig that hole. Built on the same design as the time tested and proven 447, 448 and 46 backhoes, the 260A uses a subframe that is MMM compatible to protect the tractor frame from the stresses a backhoe transmits. Hydraulics are cushioned at the ends of cylinder travel to protect against abrupt stops and can be operated at idle, which is a great feature for first time backhoe users or in tight, damage-sensitive quarters. We found the legroom to be generous and the controls ergonomically placed.

Our test tractor was equipped with a 12” bucket (8” and 16” buckets are available). The 12” bucket comes with three bolt-on teeth, weighs 49 lbs and would be a good all-around general use choice. Checking off the FILB option and the 1025R comes equipped with power beyond rear outlets. These can be handy for other 3PH functions, such as operating a hydraulic top link. In the transport position, the ramp angle is 15 degrees, which should clear just about any trailer you might use to transport the 1025R. To remove the backhoe and reinstall the 3PH lower lift arms took us about 10 minutes, a time we’re sure could be cut in half with more experience. And no tools are required.

Heading off to the north forty, the 3TNV80 never struggled for power. While we’re big fans of three-range hydrostatic transmissions, the extended low-range speed on the 1025R makes up for some of the difference. Extending the backhoe boom, we measured the reach at 104” and the swing arc just over 150 degrees. Dig depth worked out to about 74” and the 12” bucket had no trouble with our New England clay. Deere rates the digging force at 2,036 lbs, confirming our gut feel that this is one capable set up. The bottom line is that despite the slightly lower horsepower compared to the 1026R, the power does not feel diminished in any way.