Over the years, the series continued to receive updates with each generation getting more deluxe features and more power. For 2015 (production is expected to begin in November with early ship dates starting in January), the series will now consist of six models (9370, 9420, 9470, 9520, 9570 and 9620) ranging from 370 to 620 HP with tracked (RT) and articulating (R) variants. For the high-performance demands of the scraper market, there are also four specially beefed up tractors ranging from 470 to 620 HP.

Powering the new series are three EPA Final Tier 4 (FT4) engines with 9370 variants getting John Deere PSS 9.0L power; 9420, 9470 and 9520 getting John Deere PSS 13.5L power; and the 9570 and 9620 getting Cummins QSX15 15.0L engines. At the Milwaukee Ride n Drive, it was asked why the Cummins power when John Deere had nearly as high-horsepower engines in products such as their marine diesels or generator platforms. The answer was simple, the torque curve and output needed to achieve the performance expected from 9Rs was more than those John Deere engines could provide. At the Ride n Drive, we also learned the 9R development team had been tasked with maximizing value. Three challenge areas were to control fuel expense, address power hop and ensure steady performance in varying operating conditions. We’ll touch on each of those below.

COMPARISON: Read our preview of the 2015 John Deere Tractor Lineup

A 9620 carries up to 400 gallons of onboard fuel and 22 gallons of diesel exhaust fluid (DEF). For the customer, minimizing total fluid consumption is paramount. John Deere addressed those high costs by outfitting 9R tractors with a new e18 powershift transmission that along with Efficiency Manager electronics, minimizes consumption while maximizing performance. 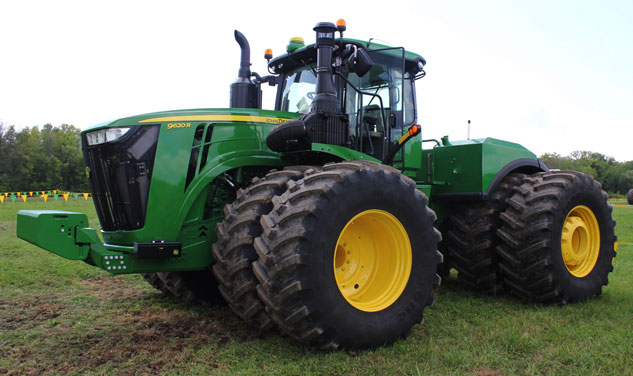 The transmission offers 18 forward and six reverse speeds with 10 of those forwards speeds 0.5 mph apart in that critical 3-8 mph range. A thumbwheel adjustment makes for IVT-like operation so the operator doesn’t need to manage engine rpm and gear selection. On the CommandARM setting, F1 can be programmed with a speed setting between 2 and 12.6 mph. Setting F2 can be programmed in a range from 2 to 25 mph. Once the setting is selected, the operator can fine adjust ground speed by rotating the thumbwheel. While in auto mode, the tractor predicts optimum shift points under load, maximizing performance and minimizing fuel consumption.

Power hop is the repetitive bouncing of the tractor under load. This condition is uncomfortable, slows speeds, lowers productivity, and increases downtime to make adjustments to ballasting and tire pressure. John Deere’s solution to power hop is the all-new front axle HydraCushion suspension. HydraCushion raises or lowers the front suspension automatically or manually to mitigate this repetitive bouncing. HydraCushion allows tire pressures to be run at the absolute manufacturer minimum so ground compaction is minimized.

At the Ride n Drive we witnessed a demonstration of a 9620R pulling a 170,000-pound John Deere 460E dump truck filled with gravel. Results of that monster pull as well as dialed-in power hop and then auto correct can be seen in the video below.

John Deere has even made room for non-John Deere electronics, opening up control over steering components such as the steering valve, wheel angle sensor, and steering control unit to third party packages. With so many choices and possibilities, there is sure to be a “right” 9R or 9RT tractor for any large-scale operator’s needs.

But 9R niceties and productivity enhancers don’t stop there. Check off the $3,371 MSRP Active Command Steering (ACS) option (can be had in packages with special pricing) and steering becomes one finger possible – even for our test tractor equipped with Michelin 800/70R38 duals at each wheel. ACS uses a gyroscope to sense yaw and makes small adjustments to keep the tractor in a line. This eliminates steering wheel drift and varies the effort with ground speed. Lock-to-lock ratios also vary, with 3.5 turns for field conditions increasing to five turns for transport.

9R tractors come with a 58 gpm hydraulic system but opt up for code 3270 and the system increases to 115 gpm (58 gpm primary and 57 gpm secondary). This set up is ideal for hydraulic fan motor demands. And as the systems are parallel, performance characteristics can be tailored to specific needs. A good example would be having Pump 1 send power to SCVs 1, 2, and 3 running a high flow/low pressure demand air seeder fan, while Pump 2 sends power to SCVs 4, 5, and 6 allocates high pressure/low flow for implement lift and down pressure needs. Bottom line: the pumps run cooler. Another advantage of the higher flow system which can support up to 8 SCVs is the ability to run the tractor at lower engine rpm while still providing enough hydraulic flow to implement needs.

We could devote an entire article to the CommandView III Cab. Check off this option and you get an air suspension seat with lumbar support, 40-degree right-hand swivel, fore-aft and lateral attenuation, adjustable backrest angle, adjustable left armrest and a folding instructor seat. The steering wheel tilts and telescopes and comes with memory settings. The glass is laminated for durability and quiet and the cabin utilizes passive noise reduction to achieve sound levels we measured between 70/80 dBA at idle. There are three 12V outlets, six-pack-sized refrigerator with sliding tray, and fuse and relay panel located conveniently just behind the seat.

Serviceability has been engineered into 9R tractors. Cummins powerplants have 400-hour oil change intervals (John Deere engines are 500 hours), and transmission, hydraulic and axle fluids all require service at 1500 hours. Cummins-powered tractors come with four 12V batteries (John Deere engines have three) and there is a battery boost terminal located on the left side of the engine.

Our time with the 9620R came to an end all too soon, but we look forward to testing other variants, including the 9620RX quad track we saw briefly in Milwaukee. We asked John Deere VP John Lagemann if there was a target date for quad track models to become available, but the response was understandably a non-committed “soon”. One thing is for certain, when quad track models join their articulated tire and single track brothers, John Deere will have one of the most complete large, high-horsepower four-wheel drive lineups in the industry.