We’re used to a couple of new surprises at John Deere product unveilings, but at a recent event in Milwaukee, Wis. Deere called “Committed to Lead,” the depth of new product offerings caught us off guard.

The day’s agenda included a late morning registration, lunch, and then a field trip to experience the new products first hand, followed by class time and then a first class multimedia presentation. Arriving early at our hotel, we found a folder containing whopping 19 press releases. Wow! 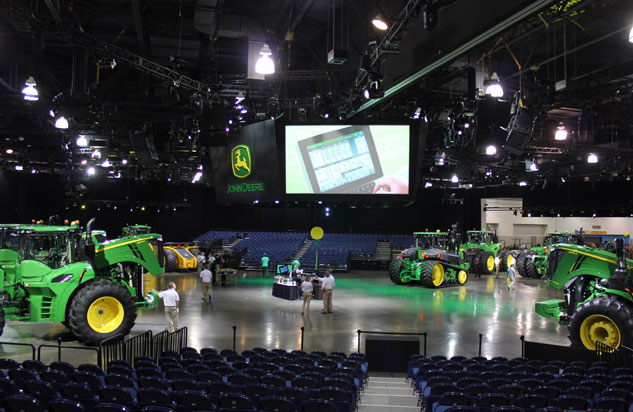 About 25 members of the media were taken to a site in nearby Oak Creek where John Deere representatives were waiting along with lots of green equipment. Of immediate interest as we pulled in was the giant yellow 460E articulated dump truck tethered to a 9520R. A “this was going to be fun” air resonated. The bus brought us to a series of large tents where the group was split between two classroom presentations and a third which would get to drive the tractors first. As luck would have it, Tractor.com was part of the driving group.

At the Ride n Drive, a John Deere representative asked, “Would you like to drive or ride in the instructor’s seat?” Moments later we were behind the wheel of a new 620-horsepower 9620R. John Deere preaches safety so our Ride n Drive began with a fasten seatbelt, overview of controls that felt family-familiar to the 7R we tested in Columbus last year, followed by an okay to fire up the Cummins powerplant (so long as we honked the horn before engaging the new e18 transmission). 9R tractors come in two variants: articulating or track and with horsepower ratings ranging from 370 to 620. Most of the articulating test tractors rode on 800 section tires – duals at all four wheels – and the expectation was that the configuration would certainly be a handful to keep on course. John Deere’s answer: Active Steering Control (ASC), which literally kept steering effort to one-finger ease. And when the speed ramped up – when you’d expect a large articulating tractor to be challenging to hold a line – the ACS system really shone. 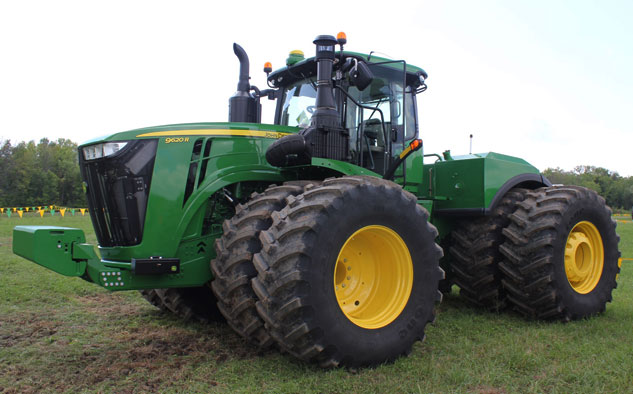 The 9620R was so packed full of new technology it deserves, and will receive, a review of its own. Keep tuned to the site for those full details, including the results of the 170,000-pound dump truck pull vs. the 9520R. Of note as we moved away from the 9Rs the 6 Series test area, a Steiger 550 Quadtrack could be seen poking partially out from one of the training tents. Conversations turned to what possible comparisons dealers, who to this point had been kept separate from the media, might have discussed.

An overview of 6 Series machines led to test drives of the new 6M and 6D tractors. These are Utility tractors with power and capability encroaching on that of row crop machines. My test ride was a 6115D with 115 horsepower on tap and driven by a 12 x 12 transmission. 6M and 6D tractors lack some of the deluxe features of the 6R machines, but they are priced accordingly and are still capable performers. And those deluxe features were instantly noticeable when a 6195R became available. There the ride was perceptibly plusher, the cab quieter, and the Instantly Variable Transmission (IVT) a dream to use. Choose the IVT and there is still a clutch, but technically it isn’t needed. Need to engage park? Pull back on the shuttle lever – it’s all that’s needed.

Running out of time, shortened sessions with the new W260 Windrower and 500R Platform, 8600 Harvester, R Series Disc Mowers, and L330/L340 square balers followed. Then it was back the hotel to freshen up before heading over to the Milwaukee Convention Center. While John Deere chaperones led the media to one of four large bleachers, a band across the arena floor opened with a bluesy tune. Soon dealers, investors and corporate brass began to parade in. After an upbeat buildup from the emcee, engines could be heard, followed by the arrival of lawn and garden tractors, z-traks, and commercial mowers from four directions – all in a bright display of machine and convention center light. Then the machines went silent as everyone’s eyes were directed to the central projector where a video presentation highlighted the lineup on the floor, including the all-new S240 that is positioned to fill the gap between entry level D Series machines and X Series Signature tractor offerings.

Wave after wave, new equipment arrived, with each segment featuring larger iron than the next. Excitement mounted as attendees viewed tractors, balers and haying implements, windrowers, and combines. And then the new 9R tractors were introduced – including an all-too brief look at a developmental machine – a quad track model! After the hour-long presentation flew by, we moved from the arena to the main convention center floor to check out equipment and implements that spanned nearly all of John Deere’s product line. The quad track, of course, was conspicuously missing. 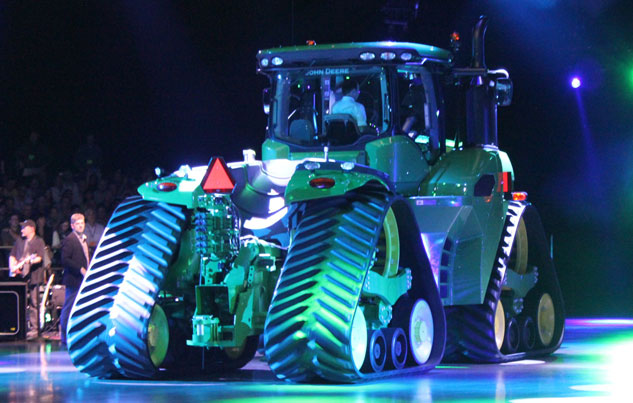 The following morning was John Deere classroom time. Senior Vice President John Lagemann stressed the significance of the new products and how through three key points (the product, the dealer partnership, and the integration of technology), John Deere equipment was leading the way to the next generation of greater farm productivity. Next up was a presentation by Shannon Norwood of Tri Green Equipment and Jamie Blythe of the Blythe Cotton Company. TGE is an 18-location dealership in Alabama and Tennessee and BCC a third generation family owned 3500-acre farm. Utilizing John Deere FarmSight, Remote Display Access (RDA), and Wireless Data Transfer (WDF), BCC’s lean crew is able to manage, operate and make real-time changes to critical details such as crop prescriptions, resulting in quantifiable improvements to overall profitability. Truly what Tri Green and Blythe are pioneering is the transition from data collection to useable problem solving field-level information.

Classroom sessions at “Committed to Lead” concluded with recaps of the 6 Series tractors, large square balers, windrowers, and harvesters, along with updates on John Deere combines, including an interesting presentation by Lenny Hill of Hillco whose new Single-Pass Round Bale System is sure to be a productivity enhancer.

Stay tuned for more detailed reviews of what we saw at the Milwaukee “Committed to Lead” product launch.