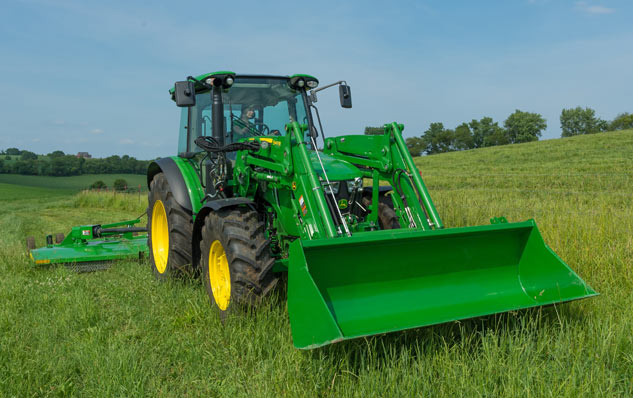 COMPARISON: Read our review of the 2017 Kubota M6S

Two transmissions are available, the CommandQuad Manual (standard) and the Command8 (optional). A series of articles could be devoted to either; such is the number of features incorporated. The base transmission comes with a manual tag, but it is anything but manual, with fully electronic range and gear shifting. A left-hand PowrReverser or a thumb switch on the joystick, of which there are two available, shuttle between forward and reverse without the need for clutching.

The CommandQuad Manual has 16F and 16R speeds with four powershiftable gears and four fully synchronized ranges. After starting the tractor, the operator selects one of five range buttons on the right-hand console: A, B, C, BCD, or CD. Select a single letter range, and clutchless gear changes within that range are allowed. Select a multiple letter range, and clutchless shifts between the gears and designated ranges are allowed simply by using the right-hand console toggle lever. A single jog on the toggle lever changes gears one at a time. Hold down on the toggle lever and gear changes accelerate.

The CommandQuad Manual comes with AutoClutch which not only allows clutchless gear and range shifting, but the ability to stop the tractor without clutching or overloading the engine. Three sensitivity settings are built in: High, Off and Low. Low would be for duties such as transport. Other technologies built in are Speed Matching, where the transmission will shift to a gear most closely matching the speed of the range the operator is shifting from; PowrReverser Modulation where the direction change aggression can be dialed in; Start Gear Selection for times when starting in first gear is contra-productive; Foot Pedal Lock which works like a car cruise control using the foot throttle; and Programmable Forward/Reverse Ratio which allows the operator to set reverse ratio from 100% faster than forward to 80% slower in 20% increments. Speed range is from 1.18 mph to 25 mph.

The Command8 transmission carries over all the features of the CommandQuad Manual and adds more, including auto-shifting. This transmission is a four-range, eight-speed unit with 32F and 16R possibilities. Some of the added features are Auto Mode, where the operator sets a target speed using a thumbwheel and the tractor figures out the best gear and range to get the task done; Load Anticipation, which increases productivity and saves fuel in certain hitch and PTO activities; Eco On/Eco Off which sets two minimum engine speeds from 900 to 2100 rpm with Eco On dropping the rpm to the programmed speed and Eco Off raising it to the higher one; and Load Control Droop which allows the operator to control the shift point so the engine isn’t pulled down by an automatic shift. A creeper option is available for either transmission.

COMPARISON: Read our review of the 2016 Challenger X-Edition MT875E

Standard hydraulics is by a twin open-center pump flowing 6.2 gpm to the power steering circuit and 19.3 gpm to implement demand (25.5 gpm total) while operating at a system pressure of 2900 psi. Option for the PFC setup and the implement flow is increased to 31 gpm while the PTO power output increases by five horsepower. This allows the Cat II three-point hitch (3PH) a lift capacity of 6979 lbs measured at 24” behind lift point. Position control is standard as is electro-hydraulic draft control. A left fender switch raises and lowers the 3PH from outside the cab is standard with a right fender control an add-on an option. The PTO achieves 540 rpm at 2100 engine rpm, 540e at 1645 engine rpm and 1000 at 2103 engine rpm. Two 540R loaders are available with the self-leveling model able to lift 3406 lbs to a max height of 141.9” and the non-self-leveling model 4259 lbs to the same height. Both have just over 101” of dump clearance and both connect using a single point hydraulic coupler. 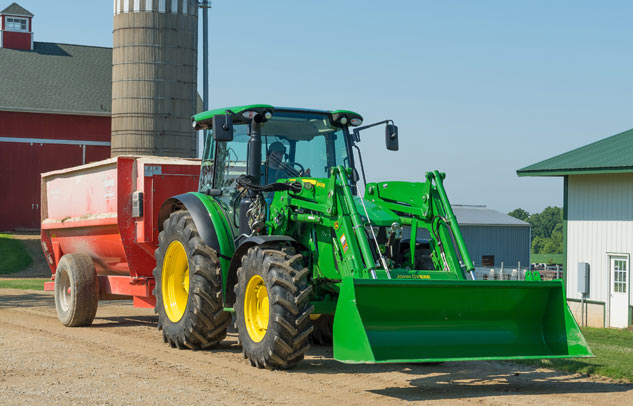 Move into the Premium Panorama Cab, and you’ll find lots of glass, minimal corner posts and a panoramic sunroof with sliding overhead shade and pull-down front shade. The standard seat is a high-back air suspension unit, but opt up for the low-frequency air suspension seat and you get heat, an adjustable backrest, and full 15 degrees of swivel. An instructor seat is an option, as is a mechanical cab suspension – a first for a tractor of this class. The right corner post houses a digital color display that is configurable and can show transmission settings and performance information. Other niceties include a factory installed radio with premium speakers and subwoofer, a Bluetooth ready (microphone included) system that is also Satellite ready, a USB port, Auxiliary connection and a rear wiper. As mentioned above, two joysticks are offered, one electrohydraulic and the other mechanical. The difference is in how the joystick actuates, with one completely electrohydraulic and the other through mechanical cabling.

A testament to John Deere engineering is that all the above has been dropped into an 88.6” wheelbase, yielding an ultra-tight turn radius of 11.1’ using brakes and 12.1’ without. Standard tires for the 9811 lbs 5115R are 12.4R24 R1W radial front and 18.4R30 R1W rear with a range of other options available. MSRP begins at $92,780 and incentives, including a Livestock Loyalty Program which offers $1000 US off for owners of a qualifying hay tool or tractor, are available.

For an agribusiness in the market for a 115 horsepower utility tractor that doesn’t know it’s not a row crop tractor, the 5115R would be well worth checking out.