Getting mighty comfortable with the 3033R 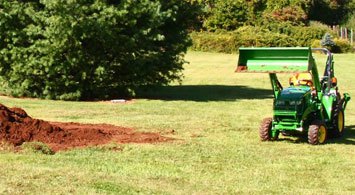 Since our initial impression report in late September, we’ve gotten quite comfortable with the John Deere 3033R TLB. Ergonomics have gotten the thumbs up from a wide range of operators, with the controls always intuitively seeming to be “right there” without having to look for a pedal, lever, or switch. Ergonomic considerations have crept into just about everything the consumer touches, and tractor design is no exception. And while we can’t think of a tractor in recent memory that had anything less than good ergonomics, John Deere seems to know just how to hit that sweet spot of comfortability.

So, what tasks have we tackled? Thus far we’ve reconfigured an existing firepit and extended its footprint, removed a dozen or so stumps, spread 20+ yards of topsoil, moved several large boulders, cleared out a dirt-pile/compost post that had gotten out of control, and relocated several arborvitae trees, all of which involved a fair amount of loader and backhoe use.

We’re finding the H165 backhoe to be well-matched to the John Deere 3033R, both in physical capability and speed of use. The sweet spot for hydraulic work seems to be around 1700 rpm, though the hydraulics function fine from idle across the engine operating range. The level indicator has quickly become a friend, a lot of which is due to a lack of visibility of the loader edge. In our initial impression piece, we noted the curved boom loader/square hood combination and wondered if it would impede visibility. With operator experiences including significant time with John Deere 2210, 790 and 4120 tractors to name a few, a universal comment was that the loader visibility could be better. That said, as the hours have mounted, all the tasks we’ve lined up have been completed in short order. The 61” heavy-duty bucket with reversible/replaceable cutting edge is well matched, though the hydraulics are certainly strong enough and the tractor footprint stable enough to handle a much larger bucket. 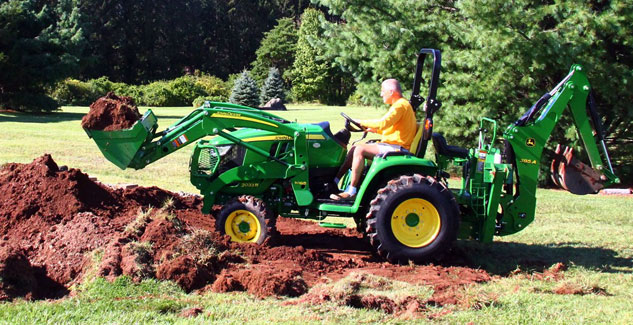 The 385A backhoe is special. Outfitted with an 18” bucket, we had also wondered how it would handle our tough Northeastern clay soil that seemingly grows overnight into rocks. While we’re not sure what the results might have been with a larger bucket, say 20” or 24”, if we hear of someone going with those larger combinations and under like conditions having good results, we won’t be surprised. That’s how well the 385A/18” bucket combination works. We found the wider bucket able to get around stumps or tree balls with the boom slightly offset with still enough digging power to get the job done. Removing a layer of turf, such as was required in our firepit project, worked like slicing butter with a hot knife – only eighteen inches at a time. Our only nit was the positioning of the SMV (slow moving vehicle) emblem, which we promptly knocked off at first use. Good thing its held on by just a radiator clamp.

The Yanmar 3TNV88C-MJT powerplant has proven to be thrifty. While it’s hard to gauge consumption over the wide range of tasks and under the conditions we’ve put the John Deere 3033R through, it certainly has been less than a gallon an hour. The only thing that it’s been hard to get used to doing is keeping the throttle up during times of low use, instead of letting the engine idle, which we’re used to but which only adds to the accumulation of soot in the diesel particulate filter (DPF).

Power has certainly been plentiful, with most of our use in the “B” range. The one area where the 3033R might be a little underpowered, is in “C” range while transporting from site to site. Though the “C” range is rated to have a top speed of 18.5 mph, the best we saw on the digital speedometer was 17.5 mph and that was down a long hill. Going up the same hill in “C” range, we saw the speed drop to 8.5 mph. “B” range chugged up the same long hill at nearly the same speed without protestation. “A” range is a bruiser, with little we could imagine stopping the tractor. Speaking to the reserves of engine power, the tractor has never stalled during any of the tasks we’ve thrown at it, and this is without having to engage the LoadMatch feature. 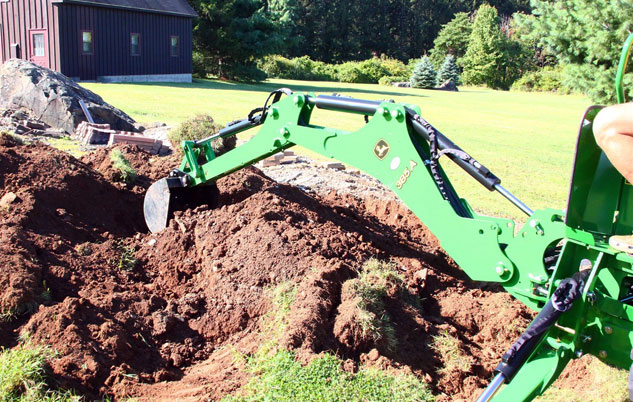 The John Deere 3033R electronics associated with the eHydro transmission our test tractor is outfitted with get high praise with easy adjustment using the little touch-sensitive control pod positioned on the right fender cowl. The most used feature has been the eThrottle, which at the tap of a button, links the engine speed to the pedal position. It’s a feature that saves fuel, is convenient, stops the operator from having to fuss with the throttle position, and is just cool. The second most used feature has been the MotionMatch function. MotionMatch increases or decreases the accelerate or deaccelerate distances. This is a handy feature when moving something delicate or tippy in the loader bucket where a quick acceleration might damage or unsettle the load.

The other electronic features haven’t gotten much of a workout, though they certainly are worthy of mention. Those features include Cruise Control, an automotive-style control with SET/- and RES/+ buttons, SpeedMatch, which sets a maximum speed useful for tasks such as tilling, and LoadMatch, which can help prevent engine stalling during periods of heavy usage. A great feature, not only saving time, but fending off operator frustration, is the Operator Presence System, which allows the operator to get out of the operator seat without having to set the parking brake or put the transmission into neutral. This feature only works when the power take-off (PTO) is not engaged. 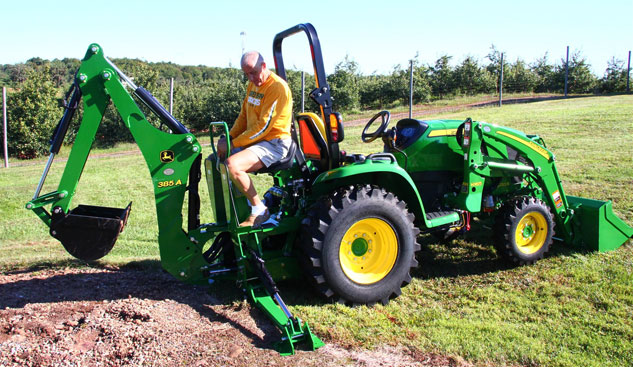 Lastly, the seat has been getting universal high marks for comfort, and is truly near-air ride seat comfortable. Fore/aft adjustment is somewhat limited, though our smallest operator (5’) and our largest (6’ 3”) were able to find non-leg-stretching or cramping positions. All-in-all, we’re getting quite comfortable with our John Deere 3033R TLB and continue to be impressed with the overall package. Stay tuned for our wrapup piece in a few weeks.