The feature-rich cousin of the B3200 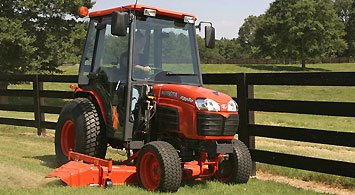 Kubota’s B series is comprised of eight Compact Utility Tractor (CUT) models ranging from 23 to 33 gross horsepower. In June we tested the all-new 32 gross horsepower B3200 HST, concluding it was a powerful tractor that sacrificed some niceties for a wallet-friendly price. This week we had the opportunity to test its upscale cousin, the B3030, which comes with those missing niceties at an almost $3000 premium. Is the B3030 worth the added cost? Read on to learn more.

The B3030 starts with a 1.5L (91.5 c.i.) four-cylinder powerplant that makes 30 gross horsepower with 23 of those ponies available at the power take off (PTO). While this is a very similar-sized E-TVCS (three vortex combustion system) powerplant to that used on the B3200, the two engines are not the same. The B3030 powerplant makes 2 less gross horsepower but carries the same power rating at the PTO which is developed at 100 less rpm (2600 vs. 2700 on the B3200). This means the B3030 sips less fuel and should have some marginally longer life expectancy built in.

The transmission used in the B3030 is a three-range hydrostatic unit that is controlled by a treadle pedal. Unlike the mostly under floorpan pedal used on the B3200, the B3030 pedal is mounted entirely above the rubber isolated floor. This design does take up a little more real estate, but it also is easier to operate – pressing the toe down to go forward/slipping the toe underneath and lifting up to go backwards, rather than lifting and moving the foot to press down with the heel for reverse. While we generally prefer side-by-side pedal arrangements, the set up used on the B3030 delivers nicely modulated control over the 0-12.1 mph forward and 0-9.6 mpg speed range. Rear 540 rpm PTO and mid 2500 rpm PTO are both standard. We noticed that the mid-PTO is offset under the tractor, so attaching a mid-mount mower (MMM) becomes less of a challenge with the operator having to reach a much shorter distance. Nice.

An open-center dual hydraulic pump powers the B3030 hydraulics, delivering 5.2 gpm to implement needs and 3.9 gpm to the hydraulic power steering (9.1 gpm total). This gives the category-I three-point hitch (3PH) a lift capacity of 1,676 lbs. at the industry standard 24” behind link arms. These specs are very similar to the B3200, but the big difference is that the B3030 offers position control over the 3PH so the operator can return the rear implement to the exact position each time without having to quarter inch their way there. Adjustable detents allow the operator to pick or vary the point the implement returns to – a big advantage when running implements such as a brush hog or box blade.

At the rear, the lower 3PH lift arms have telescoping ends, the stabilizers (mounted inside of the lift arms) also telescope, and the right link arm comes with a ratchet lift rod for fast height adjustments. These fast adjustments make for less wrestling with 3PH implements, which is a real back saver and a way to increase productivity.

Climb up into the operator platform and settle into the high-back seat and you immediately notice another difference – the seat on the B3030 is much more comfortable than the one on the B3200. With parallel-link suspension, arm rests that fold up when not required, and automotive-style lumbar support, operator fatigue is minimized.

Kubota matches the seat adjustability with a steering wheel that tilts. Controls are well-marked and color coded. Kubota also inclines the levers slightly inwards towards the operator for ease of use. Gauges are white-faced and offer excellent visibility in bright sunlight though in the dark they are a little more difficult to read. A large tachometer dominates the center with smaller fuel and temperature gauges flanking the tach. LED warning and indicator lights keep the operator up to date with system information. One thing we were puzzled by was the lack of a parking brake indicator and several times we drove off with the brake still engaged. Cruise control is standard as is differential lock. Two other niceties B3030 owners can appreciate are the cup holder and large capacity toolbox.

Our test tractor was equipped with Kubota’s LA403 loader which is rated to lift 1091 lbs. to 84.6”. We felt the 53” bucket was a little small for the tractor and would probably opt for the 60” bucket if we were checking off order options. The joystick control is built into the loader stanchion so it doesn’t take away from platform space. Response was snappy with 3.1 seconds to raise the loader to full height, 3.7 seconds to lower, 2.3 seconds to roll the bucket backwards and 1.6 seconds to dump. Breakout force is 2287 lbs and the bucket in a full dump position will clear 67”, sufficiently high to clear most pickup beds or trailers. Dig depth is 5”.

Our test tractor did not come with the BH76 backhoe option, but purchasers who order the B3030 so equipped will get a subframe unit with a 92.9” dig depth, 120.1” reach, and multiple bucket width options. A mechanical thumb is available as an option.

Two mid-mount mowers are available: a 60” and a 72”. Our test tractor came with the RC72-30B MMM, which is a side-discharge, three-blade floating deck mower. Cut range is from 1.5” to 4” using a gauge wheel. The deck is one heavy-duty unit, weighing 463 lbs. We found cut quality to be good, with a fine discharge and almost no windrowing. This commercial duty deck is not available on the B3200. 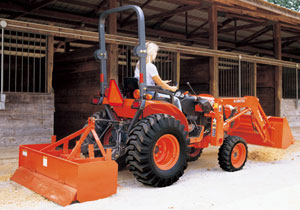 So, do the niceties that come with the B3030 warrant the additional outlay? When we tested the B3200 we didn’t think so. But the addition of position control over the 3PH makes it almost worth it by itself. Add the tilt wheel, toolbox, cupholder, adjustability of the 3PH arms and links, and the heavier-duty mower deck and we could easily lean towards the B3030. Then thinking of the upgraded seat, if we were in the market for a tractor of this size and class, we would probably opt for the B3030 – we just wouldn’t let the CFO know there was a choice.