A capable tractor-loader-backhoe for rental, landscape and construction use 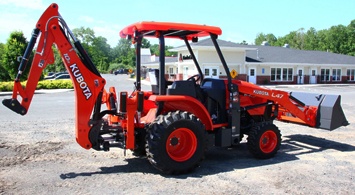 Tractor.com’s first exposure to the new L47 and M62 TLBs (tractor-loader-backhoe) was at the Kubota Dealer Meeting held in Georgia last October. Until then, the TLB series had been comprised of four models, the 26hp B26, 39hp L39, 45hp L45, and 59hp M59. At the Dealer Meeting, we learned the B26 would remain the same, but the L39 and L45 would be replaced by the L47, and the M59 by the M62. Shipments to dealers was expected to begin in February 2016.

We tested an L45 TLB in February 2013 and came away impressed at the package’s capability and versatility. With the advent of a new model with more power, we couldn’t wait to get behind the wheel of one and report our findings. Filling the dealer pipeline took longer than expected, but thanks to Ruwet-Sibley Equipment Corp., a third generation family business with locations in New Milford and Torrington, Conn., an L47 was made available for our review. What we discovered turned out to be well worth the wait. 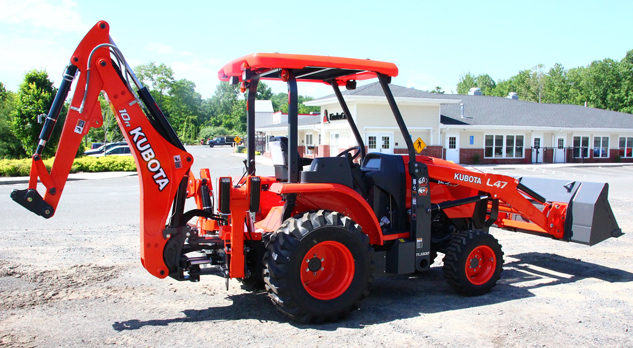 Powering the L47 is a 148.5-cubic-inch Kubota four-cylinder engine that is turbocharged and uses common rail injection to make 47.1 gross and 33 power take-off (PTO) horsepower at 2700 rpm. This is an increase of 2.1 gross and 1 PTO horsepower over the lesser displacement engine (134.1 cubic inch) powering the L45. EPA Final Tier 4 (FT4) compliance is achieved using exhaust gas recirculation (EGR) and a diesel particulate filter (DPF), while still maintaining reliability along with high levels of power and torque. The addition of the DPF necessitated a taller hood profile, though we couldn’t discern any lesser forward visibility.

L47 hydraulics remain the same as on the L45 with a combined total of 25 gpm (11.8 loader/backhoe, 6.6 gpm backhoe boom swing, and 6.6 gpm power steering demand).  If so optioned with a Cat I three-point hitch (3PH), the lift capacity is 2756 lbs at the industry standard of 24” behind lift point. Position control consistently returns the 3PH to the same operator adjustable height. A 540 rpm rear PTO is now standard and is hydraulically engaged and independent. This means the L47 no longer needs a clutch pedal for PTO engagement/disengagement, improving ease of use and freeing up floor space. 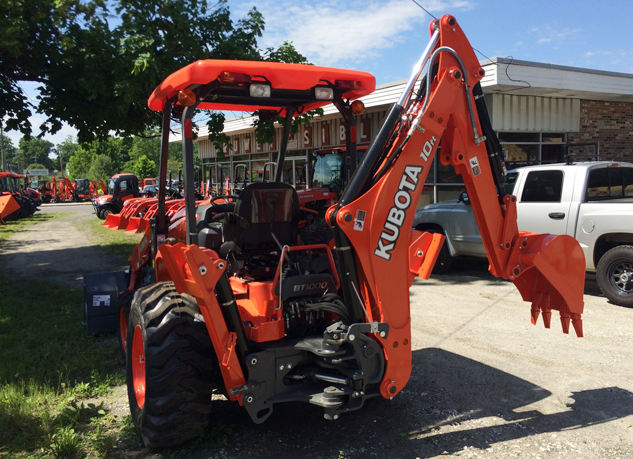 A single three-range hydrostatic transmission called HST Plus delivers power to the ground. The system gives automated control over the HST pump and drive motor for optimal performance, regardless of the working conditions or even operator experience. Advantages of the system are Auto Throttle Hydro Dual Speed (H-DS) which adds High and Low to the three-range hydro and effectively gives the unit six speed ranges, HST Response Control which modulates the system responsiveness to operator and condition preference, and Auto H-DS along with Stall Guard Plus which let the system automatically shift between High and Low for hills and varying loads while preventing the engine from stalling when those high loads are encountered.

The loader used on the L47 is Kubota’s TL1300, which has a max lift capacity of 2848 lbs to a max height of 113.9”. Full dump clearance is 90” with a dig depth capability of 3.5”. While the loader is being used, hydraulic flow to the backhoe can be shut off using a switching lever, which reduces oil temperature rise. To increase hydraulic response via engine speed without increasing travel speed, a throttle-up switch is located on the joystick. Bucket attachment is by a two-lever quick coupler (standard) with an optional hydraulic quick coupler available that doesn’t require the operator to even leave his or her seat. Cycle times are 3.2 seconds full raise, 2.9 seconds full lower, 1.9 seconds full curl, and 2.2 seconds full dump. With the self-leveling system engaged, raising and lowering times are slightly increased. 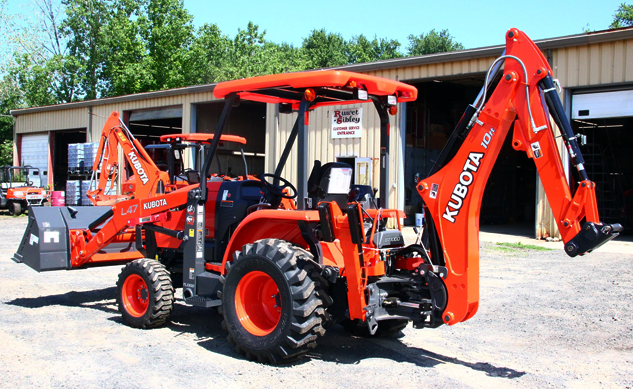 The backhoe used on the L47 is Kubota’s BT1000B, which is a four-point quick-mount attach/detach system with 121” dig depth capacity (2’ flat bottom) and 160.9 inches of reach. Buckets use a quick hitch system (compatible with select Kubota buckets) that allow for fast bucket changes. Stabilizer pads flip over without the need for tools. Dig force using the bucket cylinder is 5825 lbs, while at the dipperstick is 3779 lbs.

Step up into the spacious and ergonomically laid-out cockpit, which has a near flat floor (there is a tiny transmission hump) and is rubber isolated, and settle into the high back weight-adjustable seat with armrests that fold out of the way. The steering wheel tilts for comfort and there is plenty of elbow room between the fenders. Insert the ignition key into the right side console and give it a twist; you’ll be greeted by a Welcome in the center LCD IntelliPanel while the engine fires up and settles into a 75 – 85 dBA idle. The range selector, located below the right side display and between the fender and operator seat, is graduated L – M – H with a neutral detent between each range. The 3PH position control lever sits alongside the range selector, and just behind are the electro-hydraulic PTO engagement knob, throttle lever, and miniature backhoe crawl joystick. A cast aluminum “r” shaped treadle pedal controls forward and reverse direction and speed and accommodates both toe/heel operation and toe push/slip under and lift up for those so inclined. 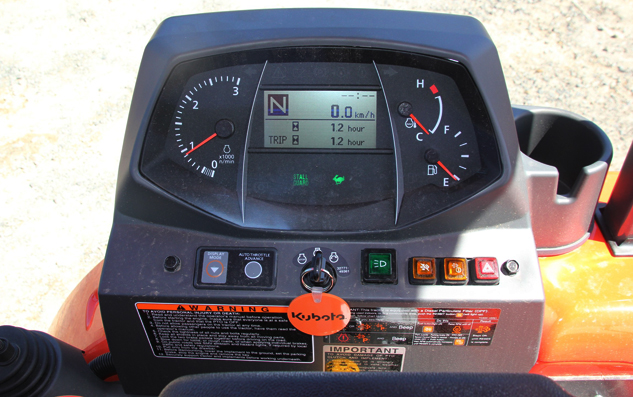 We had not driven an L-series TLB since 2015, and prior to that 2013, but the control layout of the L47 is such that you are instantly at home and ready to explore the capabilities. At idle the loader cycles nicely, but you really want some engine rpms to get max performance. That’s where the throttle-up switch really comes in handy. Also worth mentioning is the slant boom loader design, which complements the hood curvature and makes for excellent operator visibility. For backhoe work, the seat swivels, and though there is understandably less foot room than when facing forward, we found the layout in no way cramped. With the seat swiveled rearward, the crawling joystick and throttle fall comfortable at the operator’s left hand. The backhoe crawling mode allows the operator to creep forward or backward while remaining at the backhoe controls using just a touch of his or her finger.

COMPARISON: Read our review of the 2016 Massey Ferguson 4710

Other improvements of the L47 over the previous generation are the increased onboard fuel capacity (17.7 gallons vs. 11.9), increased vehicle weight (7205 lbs vs. 7173), relocation of the split brake pedals to the left side space previously occupied by the clutch pedal, a 27% increase in floor space, and the optional single lever hydraulic front implement hookup. These improvements have come at a cost. The L45 we tested in 2013 carried a base MSRP of $47,757. A base L47 now carries a MSRP of $51,470 and can be optioned well beyond $70K. 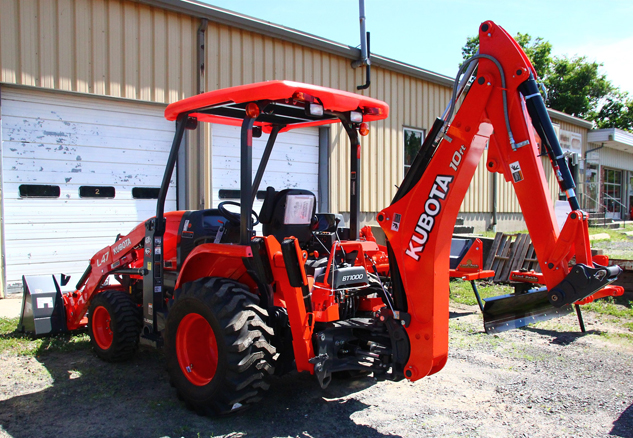 Equipment rental businesses, landscapers, and construction companies will see the L47 as a well-designed, powerful machine that can deliver reliable productivity on the jobsite and quickly pay for itself. For a business in the market for such a machine, the L47 would be well worth checking out. And, if you’re in the vicinity of New Milford or Torrington, Conn., Ruwet-Sibley Equipment Corp. would be a good place to begin.