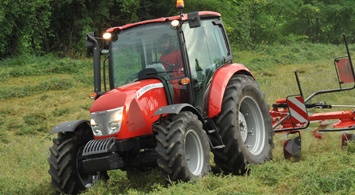 Cyrus McCormick is widely credited as the father of modern agriculture. The hill plow and reaper he patented were innovations that forever changed the farming landscape. To handle demand, McCormick set up manufacturing in Chicago, Ill. where access to Great Lake shipping was advantageous. In 1871, the Chicago facility was destroyed in the Great Chicago Fire. McCormick used some $600,000 of his own fortune to rebuild and by 1873 production resumed. 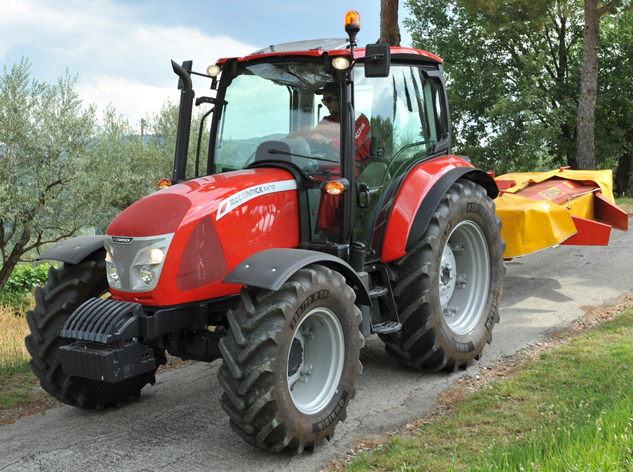 When Cyrus McCormick passed away in 1884, his son Cyrus Jr. assumed control and subsequently presided over a large expansion that led to a merger of the McCormick Company with Deering Harvester, Plano Manufacturing, Champion Line, Milwaukee Harvester, and Parlin Orendorff. The resultant International Harvester Company became a dominant force in farm machinery production. In the 1920s the Farmall tractor was introduced and went on to become one of the most popular tractors ever. By 1930, over 100,000 Farmall tractors were working farms and fields across America.

Farmall production continued for 50 years and International Harvester thrived, but distractions such as the manufacture of trucks, busses and even refrigerators led to a loss of focus and rapidly escalating amounts of red ink. When Case IH was required to divest assets to gain European Union regulatory approval to merge with New Holland Ag, McCormick was acquired by ARGO SpA, which already had purchased Landini from Massey Ferguson, Valpadana from CNH Global and Laverda from Fiat. Today, brand dedicated manufacturing takes place in three state-of-the-art plants in Fabbrico, San Martino in Rio, and Luzzara, Italy and the McCormick name is once again synonymous with cutting edge technology, deluxe features and class leading comfort. 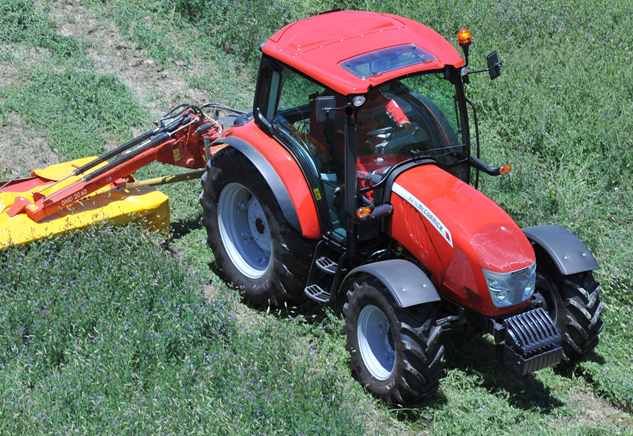 COMPARISON: Read our review of the 2015 Massey Ferguson 4608

The subject of this week’s test, the X4.70, gets power from a Deutz C4DT62 3.6L four-cylinder engine that is turbocharged and intercooled and produces 101 rated horsepower at 2200 rpm (107 hp max). At the power take off (PTO), there is 85 hp available. Torque reserves are deep, with as much as 420 lb-ft available at rated RPM. EPA Tier 4i emissions compliance is achieved through a combination of cooled exhaust gas recirculation (cEGR), diesel oxidation catalyst (DOC), high pressure common rail (HPCR) injection, and electronic engine management. 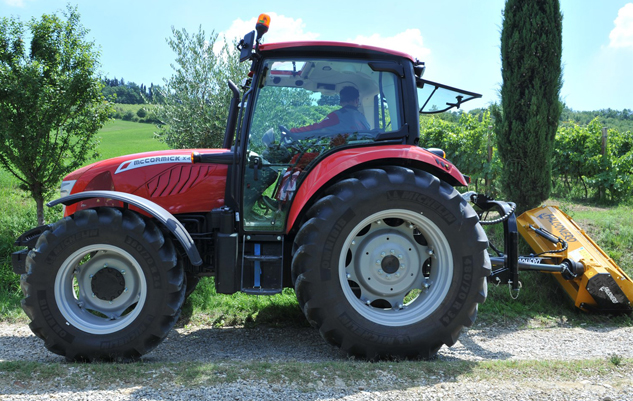 Base transmission is a built-in-house 12F x 12R mechanical Shuttle that has seven of those speeds smack in the middle of the all-important 2-9 mph range. A left hand turn stalk lever is used to control directional motion along with two levers on the right hand console, one for the four fully synchronized gears and the other for the three non-synchronized ranges. Order a X4.70 with this transmission and clutching is required when changing direction or making a gear change. Changing transmission range also requires clutching along with having to bring the tractor to a halt. Opt up for the power reverser transmission and you get effortless, clutchless control.

For maximum ease and control, McCormick offers a Hi-Low gear splitter that allows the operator to increase/decrease speed with the press of a button by 18%. This option also comes with an 8:1 creeper for requirements that need high engine rpm for power and PTO but slow ground speeds. Transport speed for the Hi-Low option goes up to 25 mph, but select the Eco Forty option and 25 mph is reached at a low 1900 rpm.

The rear axle is made from cast steel with planetary final drives and a fully locking electro-hydraulic differential lock. Step on the right side split brakes and the transmission automatically goes into 4WD to aid in braking. Need more braking power? No problem, you can outfit your X4.70 with front disc brakes.

Hydraulics run through an open center system with separate pumps for implement requirements (15 gpm) and power steering needs (8.5 gpm). This gives the Cat II three-point hitch (3PH) a lift capacity of 5952 lbs. at the ball ends. Need more 3PH lift capacity? No problem, there is an option that jacks up the lift capacity to 8598 lbs. Lower ball ends are adjustable and the outboard stabilizers telescope for ease of attachment. Position control and draft control are standard as are two rear remotes along with an option for a third. Need more versatility? No problem, two more SCV controlled valves are possible for a loader or a front 3PH, the latter a Cat II as well with 3858 lb lift capacity. 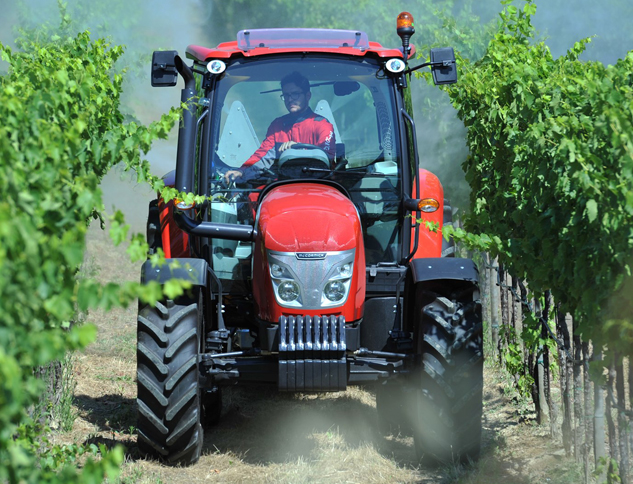 A 1000 rpm front PTO is also supported. For the rear PTO, both 540 and 1000 rpm are standard. All that’s required to change from one speed to the other is a flick of a lever left of the operator seat and a shaft change requiring only simple hand tools.

Eying the X4.70 from the outside and the spaciousness of the cab immediately catches your eye. The width of the glass doors almost screams come in two at a time, with access not only possible from either side but with enough room to have the operator doing so if so desired. Climb up into the cab and the feeling of spaciousness continues. The floor is completely flat, pedals are suspended, and levers and controls are color coded and ergonomically spaced.

Settle into the deluxe fully adjustable air ride cloth seat and there is a near unobstructed 360-degree view with the four cab posts so small they seem almost invisible. The right side engine exhaust stack is also placed in such a way that vision is not at all hampered. Adding to the spacious view is a front roof skylight that can be opened and allows an extended view of the loader work range.

Two loaders are compatible with the X4.70; the X431 non-self leveling loader and the X436 our test tractor was equipped with. The X436 is self leveling with a lift capacity of 3263 lbs to a max lift height of 134”. Breakout force is 3564 lbs and roll back force is 4059 lbs. A variety of bucket sizes are available and the system is skid-steer compatible. 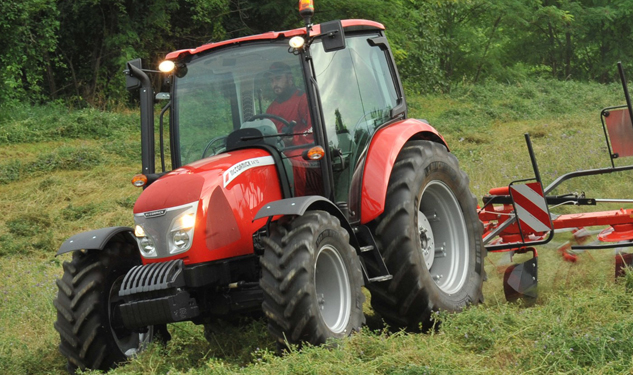 Ideal for seed bed preparation such as plowing, tillage and harrowing, as well as use in tight quarters such as in orchard rows, any agribusiness in the market for a deluxe 100 hp cab tractor that comes well equipped but still offers a range of customizable options to fit individual needs would do well to check out the McCormick X4.70. And if you’re in the vicinity of Montague, Mass., stop in at Sirum Equipment Co. who made an X4.70 available for our review, and ask for Adam.