In last week’s Subcompact Tractor Comparison – Part 1, Tractor.com readers learned about some of the comparative features and niceties of the Kubota BX2380, Massey Ferguson GC1705, and Kioti CS2210. This week we talk about four more competitive models and then wrap up the comparison with some parting thoughts.

The John Deere 1-series, or “family” as John Deere likes to refer the grouping, consists of two models, the 22.4 horsepower 1023E and the 23.9 horsepower 1025R. The prefix is somewhat close to the gross horsepower of each model rounded up, while the suffix alludes to the E (economy) or R (premium) classification. The 1023E we chose for this comparison is powered by a Yanmar three-cylinder diesel (the 1025R also has Yanmar power) making 22.4 gross and 15.3 PTO horsepower. A two-range HST delivers power to a choice of R3 or R4 tires. Control over the HST is by the familiar side-by-side pedal arrangement long used by John Deere. The cockpit platform has a more defined transmission tunnel that divides the sides, but the layout is rubber-isolated, uncluttered, and with ample foot room for all but possibly the largest shoe sizes. The brake pedal is positioned on the left side.

The Cat I three-point hitch (3PH) is rated to lift 681 lbs measured at the industry standard of 24” behind link arms. John Deere uses what it calls “select control” for hitch positioning and control, but the system is really just guess-where-you-are – functional and useable – but not as nice as graduated position control, especially if heavy 3PH work will be a large part of tractor use.

Standard features include a mid-back seat (fixed back and no armrests), loader joystick nicely integrated into the fender cowl, cup holder, poly hood that raises on gas struts, and foldable ROPS.  MSRP is $12,062. Non-commercial warranty is two years /2000 hours bumper-to-bumper and six years powertrain. Options include 54” and 60” drive-over decks with auto connect (connects PTO shaft without the operator having to get out of their seat), an inexpensive option, and two front-end loaders (FELs) with the ability to lift 512/570 lbs to 71.2”.

Mahindra created quite a stir when its Max series of tractors were introduced in 2012. Were they subcompact tractors at all, or really compact tractors in disguise. The marketplace cried foul, but plenty of new purchasers found the expanded capabilities to their liking. While that controversy swirled, Mahindra introduced the eMax series. eMax tractors consist of two models with three configurations: eMax 22 gear, eMax 22 HST, and eMax 25 HST. Horsepower is exactly spelled out in the model nomenclature.

eMax tractors are built by TYM and outfitted with three-cylinder Daedong diesels. PTO output rating for the eMAx 22 is 14.9. A two-range HST delivers power to a choice of R1, R3 or R4 tires. Not shying from controversy, eMax tires are a size larger than the competition. A side-by-side pedal arrangement modulates HST forward/reverse and tractor speed. As with the John Deere 1023E, there is a more defined transmission tunnel dividing the footwells, but rubber-isolated space is ample and not cramped. The brake pedal is also positioned on the left. The Cat I 3PH is rated to lift 1320 lbs (more on this in the wrap up). Control over the hitch is guess-where-you-are. 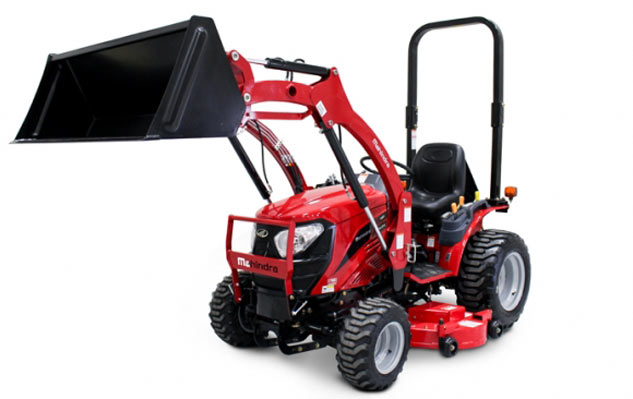 Standard features include a mid-back seat (fixed back and no armrests), loader joystick affixed to the loader stanchion, cruise, poly hood and fenders, cup holder, folding ROPS and horn. MSRP for the eMax 22 HST is $13,090. Non-commercial warranty is two years/2000 hours bumper-to-bumper with extended powertrain coverage to seven years/3000 hours. Options include a 60” mid-mount mower, and a FEL that is rated to lift 900 lbs to a max height of 75.3”. A backhoe is available from the factory or can be dealer installed at a later date. 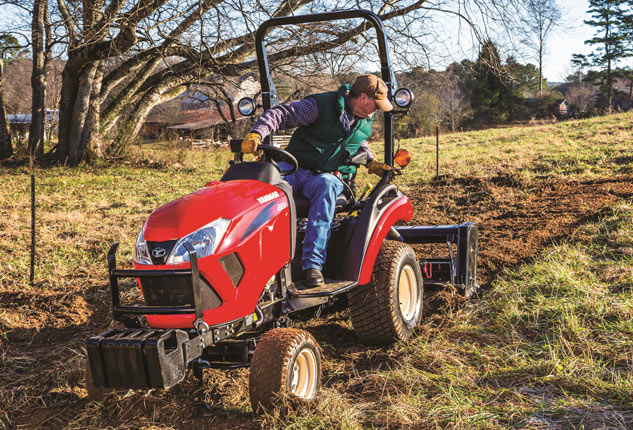 Yanmar, who has built subcompact and compact tractors for brands such as John Deere and Cub-Cadet, in 2014 announced it would be building and selling its own line of machines. Returning to the marketplace with its traditional red paint scheme, three models were initially introduced: the SA221, SA324 and SA424. Our focus is on the SA221.

The SA221 is powered by a Yanmar three-cylinder diesel making 21.5 gross and 15.6 PTO horsepower. A single-range HST transmission sends power to a choice of R1, R3 and R4 tires. Control over the HST is through a side-by-side pedal arrangement with the brake pedal properly located on the left. The rubber-isolated platform has a large-ish center transmission hump at the furthest back heel position that necks down to a small divider to the front that leaves plenty of floor space. The Cat I 3PH is rated to lift 660 lbs. with a worthy note that the hydraulic system uses a twin pump arrangement separating implement and power steering demands. Position control is standard. 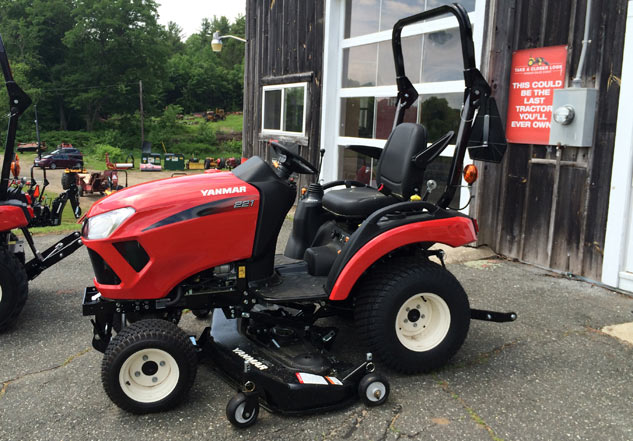 Standard features include a mid/high-back seat (fixed back with armrests), loader joystick incorporated into the right fender cowl, poly hood and fenders, cup holder, and folding ROPS. MSRP for the SA2210 is $11,531. Non-commercial warranty is two years bumper-to-bumper with extended powertrain coverage to five years. Options include a 60” mid-mount mower, cruise control, a FEL rated to lift 825 lbs to 71”, and a backhoe that can be factory outfitted or available later as a dealer installed option. 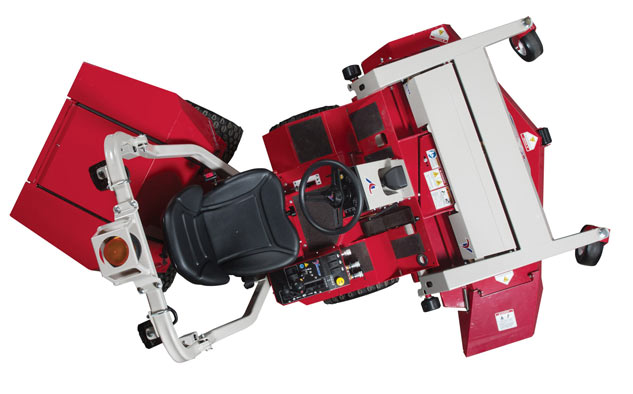 Including Ventrac in this comparison might be surprise to some, but it shouldn’t. Ventrac is known for manufacturing quality residential/commercial machines with some unique attachment possibilities and slope handling unlike any tractor in this comparison. Both gasoline and diesel variants are available, but sticking to the article criteria, we compare the 3400Y which is powered by a Kubota three-cylinder diesel.

Output from the Kubota powerplant is rated at 22 horsepower and is sent through a single-range AWD Hydro-Gear HST transmission to a choice of all-terrain or R3 tires. Control over the HST is through a two-lever set up Ventrac calls SDLA which stands for Speed, Direction, Lift, and Auxiliary control, and a treadle pedal. The system takes a little getting used to, but it fast becomes intuitive and offers nice modulated control over all the tractor functions. Ventrac tractors do not come with a rear 3PH, but instead have focused their attention on front attachments. Combine this focus with a weight transfer system that transfers implement weight onto the tractor, an articulating frame, and you get versatility, improved traction, braking and slope handling. 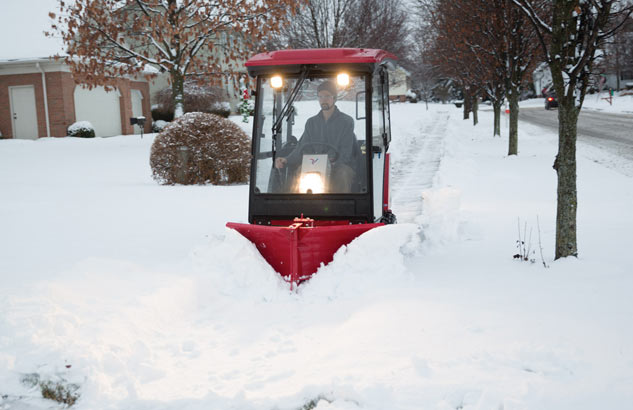 Standard features include a high-back seat (fixed back and no arm rests), tilt wheel/column, folding ROPS, 28” turn radius, and rated 20-degree slope handling. MSRP for the 3400Y is $13,270. Non-commercial warranty is three years bumper-to-bumper with Kubota standing behind its power plant with two-year/2000-hour coverage with major parts to three years/3000 hours. Options for the 3400Y include a 2” rear receiver, 52” and 60” mowing decks, and heated cab. Implement options get really interesting with blades (including a hydraulic V-blade), leaf blower, rotary broom, rake, snowblower, edger, stump grinder, aerator, and power bucket with grapple option.

One thing that is clear is that each of the tractors in this comparison are well-built, quality machines engineered to deliver high levels of performance and not just in the primary area of mowing. We’ll highlight some thoughts to consider for each tractor we’ve talked about.

Kubota gets high marks for the level of refinement the BX series has gone through with the operator now having the ability to attach/detach the FEL without getting out of the driver seat. The backhoe does the same with the operator only having to walk around to the tractor rear for the hydraulic single-point connector. One thing a prospective buyer needs to keep in mind, BX tractors do not offer backward backhoe compatibility. If the backhoe isn’t ordered from the factory, there is no dealer install option or ability.

The GC1705 is a nicely developed tractor. Though it is the oldest design of the comparison, it hits all the right points while coming in with the lowest MSRP of the pack. PTO horsepower might be important to prospective owners with plans for heavy ground engaging work. Here the GC1705 comes in best in comparison (tied with Kioti) at 18.7 PTO horsepower. Order a GC1705 today and later decide you need a backhoe; the GC1705 is backward compatible.

The CS2210 also hits all the right high points. The PTO rating is best in comparison (tied with Massey Ferguson), 3PH control is position with the mid-mount mower lift and 3PH separated, all-the-while coming in at the second lowest MSRP in this comparison. Backward compatibility with a backhoe is also supported.

The 1023E is a nice design, with excellent ergonomics that gives up few niceties to its more expensive 1025R sibling. Ease of attachment is right up there with any manufacturer, with the drive-over, auto-connect decks taking that ease to new heights. MSRP is right in the middle of the pack in this comparison which goes against the sometimes perception that big green carries a premium.

Unlike the Max tractors when they were first introduced, the eMax 22 is clearly a subcompact. Three-point hitch lift capacity is the highest of the comparison – almost twice that of the field – but Mahindra doesn’t state where the lift capacity is measured and we suspect there is more parity than the numbers suggest. Powertrain warranty is also the best of the field. And if a purchaser is so inclined, this is the only subcompact in the comparison that can come with a gear transmission, saving an additional $560.

The SA221 is a nicely developed tractor with features driven by a ground-up redesign built around focus group input. The latter told Yanmar that most users of this class of machine never use differential lock, instead relying on 4WD when the conditions warrant. This, and the single-range HST freed up cost that Yanmar directed to twin hydraulic pumps and position control. For a prospective purchaser who would be doing a lot of box blade, rake or tiller work, the SA221 hydraulic set up has a lot going for it.

The 3400Y can’t come with a FEL, though has a power bucket option. It also does not have a 3PH. What it does offer is superb slope stability, garden tractor-like tight turn radius, excellent traction aided by the weight transfer system, unique front attachment lineup, all in a compact size. If you’re looking for cup holders and storage trays, the 3400Y possibly won’t be your choice, but if you’re looking for a commercial grade tool to handle demanding tasks, the 3400Y would be well worth consideration.