Is this alternative fuel the future of farming? 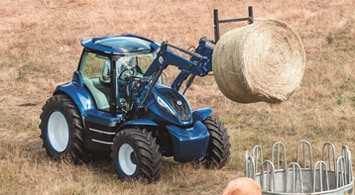 Case New Holland (CNH) began experimentation with methane power in 2013. It was not the company’s first foray into alternative fuels. FPT Industrial, a sister company, pioneered natural gas power more than 20 years ago and today boasts some 22,000 so-powered (CNG/LNG) vehicles on the road. In 2006, CNH became the first manufacturer to offer 100% biodiesel compatibility. The Energy Independent Farm followed in 2009. In 2010, the first hydrogen fuel cell prototype was introduced. And in 2012, a propane-powered tractor prototype was explored.

The first-generation methane-powered concept tractor was a T6.140, and developed in a joint venture between CNH and Itaipu Binacional, the largest generator of clean, renewable energy, and operator of the Itaipu Dam in Foz do Iguaçu, Brazil. The T6.140 was rated to output 153 horsepower with 542 Nm of torque, making it of equivalent power to a same-sized diesel. This tractor has undergone extensive field testing in Brazil.

A second-generation methane-powered concept tractor followed, with the T6.180 now outputting 180 horsepower and 740 Nm torque. This tractor has undergone extensive field testing in Italy, Spain, the UK, Germany, Denmark, and the Neverlands. Its 52-kilo fuel tank (~115 lbs.) is able to provide up to a half day field use without refilling. Both concept tractors have been able to meet the proposed 2020 European emissions requirements in current configuration, while achieving 30% less operating costs than an equivalent-power diesel tractor with near zero CO2 emissions.

The CNH vision is that of a farm producing not only food, but the energy needed to run its operations. This includes the fuel to power its equipment, heat for farm buildings, as-well-as energy that can be used to run generators and create electricity for the farm, grid, and local community. End-of-digestion byproducts can also be used as natural fertilizers for the farm’s fields.

So, how does it work? Methane is produced by a system that utilizes a biodigester, refiner, and storage system. Harvest crop, supplanted by material from other sources, is collected and compacted to create silage. These other sources can include animal waste, manure, slurry, as-well-as food waste from restaurants and supermarkets. The silage is then fed into the biodigester, mixed and heated to start a reaction that creates methane as the silage breaks down. The raw biogas is then fed into a refiner where it is transferred into a fuel-grade methane. The final step is to send the methane to a storage system that farm equipment can access. The storage system injects methane into tanks at 9.6 bar, allowing for a fueling time equivalent to that of a diesel tractor tank.

In the development of methane-compatible engines, FPT Industrial recognized and had to come up with a system that dealt with significant variance in the quality of methane. The electronics that were developed respond to the quality and respond accordingly. Along the way, several other advantages were identified: emissions compliance required only a simple three-way catalytic converter, an aftertreatment system that is maintenance free, and did away with the need for diesel exhaust fuel (DEF) additions, or a diesel particulate filter (DPF).

Through the extensive testing the T6.140 and T6.180 have undergone, durability has proved to be the same as with a comparable diesel with no increase in service intervals. Additional benefits have shown a methane-powered engine to be quiet – as-much-as 2-3 dba quieter than a comparable diesel. And while 2-3 dba might not seem a large improvement, it equates to a 50% reduction in drive-by-noise, making a methane-powered tractor ideal for settings where sound levels are important, such as municipalities, yard work, and transport. CNH tells Tractor.com that methane-power is in the final stages of development, with expectation that production will start within three years. 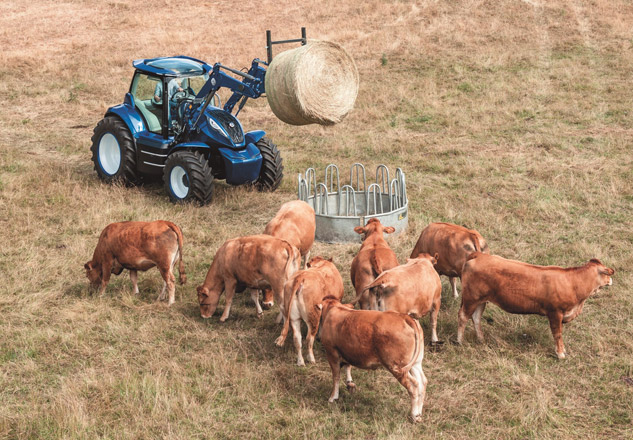 The concept tractor unveiled at the 2017 Farm Progress Show held in Decatur, Ill. was a crowd-stopper. Also based on a T6.180, but with clean-slate design elements built around the methane storage requirements and allowing the incorporation of automotive influences, the look was like no other tractor available. Aggressive air intakes, spoiler-like wings over the front tires, steeply-sloping narrow-profile hood, abundant LED lighting, flowing lines, and a glass domed rooftop. Color, of course, was high-gloss blue.

Inside the cab, the design showcased all the ergonomics and technology improvements available. With 20% more glazed area than a traditional tractor, 360-degrees of visibility made even better by the lessened hood area, the abovementioned glass domed rooftop, which allowed for full incorporation of the precision land management (PLM) receiver, the methane-powered concept feels like no other available tractor from behind the wheel.

The curved headliner contains several interactive color touch display screens that are customizable and can be dragged to a display located in the steering wheel for modification, and then swiped back to the headliner. The leaf-shaped seat makes a logo-inspired statement and bolsters the operator in ways no other seat on the market can. Combined with ergonomic controls placed a fingertip away in the integrated armrest, the T6.180 concept vehicle deserved to be a crowd-stopper. Other niceties include the incorporation of several cameras, including a reverse back-up camera that is displayed in the steering wheel screen. Smartphone compatibility has also been incorporated, with the ability to do things such as lock/unlock the tractor or raise/lower the three-point hitch (3PH) from the devices touchscreen.

The current methane-powered tractor will also be able to run on natural gas with propane being incorporated into company strategy. This fits North American markets quite nicely, with 1/3 of farms already having propane on premises. And while digester farms are more prevalent in Europe, North America is seeing growth in this area, especially in the state of Vermont. As an added advantage/backup, methane-powered tractors can also run on commercially-available methane from the existing distribution network. 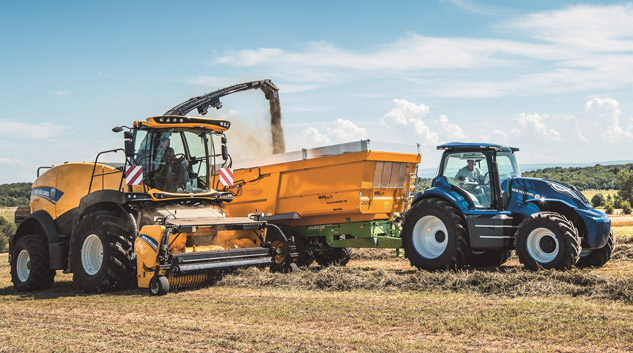 With real field conditions showing a methane-powered tractor to have 10% lowered CO2 and up to 80% less overall emissions than a equivalent power diesel machine, the possibility of having an energy independent farm, and the allure of good stewardship over natures resources, we suspect it won’t be long before methane-power is just another check of the tractor order sheet. And that is certainly something to look forward to.