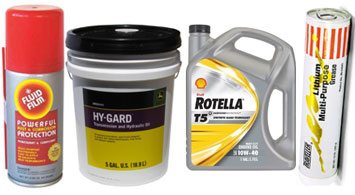 Disclaimer: recommendations in this article should not be considered a substitute for those specified in manufacturer owner manuals, which should be thoroughly read, understood and followed. An owner manual will contain the manufacturer’s schedule for maintenance, lubricant specification, location of maintenance points and needed tools, if any.

Whether you are a farmer, hobby rancher, grounds maintenance professional, municipal user or homeowner, a tractor is one of the greatest back saving, productivity enhancing pieces of equipment ever invented. With over 1.25 million in use today, industry attention to lubrication technology has led to advances far past grandpa’s having just one lubricant for all tractor needs.

Today, an engine oil lubricant is very much different than one used in a hydrostatic drive or an axle for that matter. Choosing the right lubricant can be the difference between long, trouble-free life or expensive repairs and corresponding unproductive down time.

Tractors, by their very nature, see use in a wide range of conditions that are dusty, dirty, often wet and with exposure to elements such as UV light, pesticides and fertilizers as-well-as other petroleum-based chemicals and fluids. Along with the strains placed on the moving components by ground-engaging and field activities, lubrication should be considered a first line of defense. So what types of lubricants are available? Read on to learn more.

Engine oil is classified by two rating authorities as to their suitability for a given set of conditions. The Society of Automotive Engineers (SAE) grades engine oil (a different system is used for gear, axle and transmission lubricants) based on the viscosity, or fluid “thickness.” SAE grades range from 0 to 60, with zero being the least viscous and sixty being the most. Today, multi-grades are most common and the system used is a two part with the first number being the viscosity at startup and the second at 100º C. A “W” designation after the first number is added to those oils rated for cold-start temperatures. So oil carrying a 10W-30 designation would have a viscosity of 10 at cold temperatures and would rise to 30 when heated.

How To Choose the Right Tires for Your Tractor

The second engine oil rating authority is the American Petroleum Institute (API), which uses an identifying system to rate the performance levels for the lubrication, cooling and cleaning of combustion engines. For engines prior to 1930, the designation was SA, followed by SB, SC, SD, SE, SF, SG and SH, which are all considered obsolete and may even cause damage to modern motors. In 1996 SJ became the API service classification, followed by SL in 2001, SM in 2004, and the current SN designation in 2011. For diesel engines, three more classifications are used: CJ-4 which corresponds to SL or SM, CI-4 which corresponds to SL, and CH-4 which meets the requirements of SJ. Using the correct oil provides improved deposit control, breakdown protection against high temperatures, and a reduction of ash which protects modern exhaust catalysts and diesel particulate filters (DPFs). Synthetic oils can extend intervals between oil changes and are thought to add more protection to moving componentry. Turbocharged engines typically have additional needs.

The hydraulic systems used in today’s tractors are very different than the single reservoir systems used yesteryear and are now as intricate and complex as automotive automatic transmissions. But be wary, automatic transmission fluids such as type “F” are not compatible with those hydraulic systems and may cause damage if used. As with engine oils, an SAE viscosity system is used to identify the operating parameters of hydraulic fluid. A common hydraulic grade would be 5W-30. This is also an application where synthetic hydraulic fluids have made big gains. Offering extended change intervals (we still like changing transmission filters at the OEM oil intervals), better protection for moving components and often less whine, as with synthetic engine oils, synthetic hydraulic fluids do come with a price premium. Another thing to remember is manufacturers will often spec out API service GL-4 but it’s important to know GL-4 is really a gear oil specification and transmission oil requirements can be different. Pay attention to owner manual recommendations and let those specs override a general specification such as GL-4.

Axle oil specifications are the same as gear oil. Therefore a specification such as GL-4 or GL-5 directly covers those needs. Viscosity grades have a numbering system similar to engine and hydraulic fluids, but generally will have higher numbers and closer ranges such as 80W-90. For cold weather use such as snowblowing, we’ve heard of milky deposits in gear oils when checking levels and speculation that condensation may be the culprit. If you come across this, an axle service including lubricant change is definitely recommended.

Chains are made from close tolerance pins and bushings and as such require a lubricant that can penetrate those tight spaces. Chain lubricants are high viscosity oils that may contain additives such as Moly. Spray-on lubricants are the most convenient, but chain lubricants can also come in a can or jar. Many have a Teflon base which resists dirt and won’t fling off the chain.

General greases come in a variety of high performance compositions. Lithium and Moly are just some of the compounds used. NLGI #2 is a spec most often used and comes from the National Lubricating Grease Institute with the number designating the ASTM penetration at 25ºC. The standard also designates an appearance standard and a food consistency analogy. In the case of number two, the appearance is that of “normal” grease and the food consistency that of peanut butter. A good grease gun is highly recommended along with a supply of zerk fittings. And as anyone who has come across a damaged zerk will know, an inexpensive repair tool such as the Workforce1/4-28 and 1/8 NPT are invaluable to have on hand. Other grease gun options are extra tips, including extended hypothermic needle tips for those near-impossible places to reach.

There are also greases that are designed to work at higher temperatures and may come with references to specific manufacturer specifications such as Cat Spec 1E2254 or John Deere JDN-360/380. Again it’s important to pay attention to the specific manufacturer recommendations found in the owner’s manual. And low viscosity greases for specific applications such as cotton picker lubricants or rotating spindles are available, so it’s best to know the designated usage and the design temperature range.

For those pesky, stuck or frozen nuts and/or bolts, penetrating oils are high solvency oils with low surface tension that cut through grease, dirt and corrosion. Most won’t damage glass or painted surfaces. These types of lubricants are easy to apply, but a little patience is required for the oil to seep in. Penetrating oils work well, but it is always best to apply a general lubricant so corrosion doesn’t form in the first place.

Many manufacturers have recommendations for general lubricant for pivot points such as seat hardware, pedals, and linkages etc. Some contain silicone that can provide a protective coating that is suitable for metal, rubber and plastic surfaces. We’re big fans of Fluid Film, which is a unique lanolin-based lubricant that prevents corrosion by leaving a long-lasting barrier that moisture and oxygen cannot penetrate. Fluid Film gets into the metal pores and works well with anything from sprayers to battery terminals, hose reels and just about any surface prone to corrosion. And Fluid Film isn’t harmful to electrical connections.

Older tractors with common hydraulic sumps can often use products such as Traveller RENEW which is a modern compound that is still suited for those yesteryear demands. Steering an older tractor can be a challenge, so products like Slick 50 or Duralube can be used to reduce steering effort. And an old trick for leaky gearboxes that would be hard or impossible to replace is to swap the fill plug with a grease fitting and then fill the gearbox with Slick 50 grease.

Know your manufacturer recommended lubricants, have them on hand and pay attention to tractor and implement service intervals, DO NOT OVERFILL the reservoirs and sumps, and check levels frequently – certainly before each use – and the results will speak for themselves.