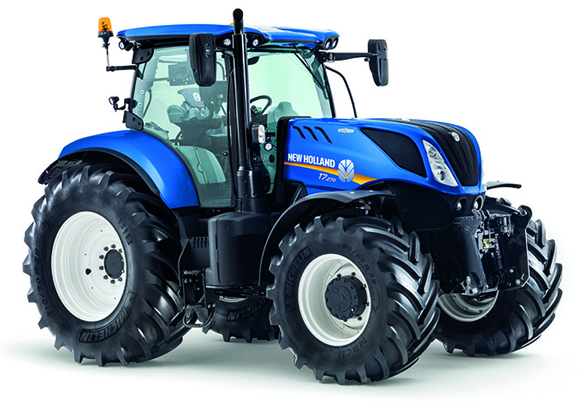 “The new T7 offers the best of New Holland’s technologies and features,” says Luca Mainardi, head of Tractor and Precision Land Management Product Management. “Great attention to detail has been devoted to provide farmers with a powerful and highly versatile tractor that will enable them to achieve the highest levels of productivity with ease while enjoying ultimate comfort.”

The new T7 Series features a six-cylinder engine and ECOBlue HI-eSCR technology developed by FPT Industrial that meets Tier 4B emissions standards without the need for Exhaust Gas Recirculation or Diesel Particulate Filter.

Increased productivity comes with easy to use automation. A new second generation Headland Turn Sequencer II has been developed. Controlled through the now standard IntelliView IV touch screen, HTS II enables complex headland turns to be created by recording a turn ‘live’ or creating one by selecting actions and trigger points from a menu. Everything from selecting the target speed of the Auto Command transmission to switching to an implement camera view is programmable and editable. It’s then placed under the control of a single button.

Further additional features include adjustment of the power shuttle clutch engagement time and Remote Valve Management. This allows any two hydraulic remote valves to be assigned to the quad switch on the CommandGrip multi-function handle.

At the front end the long wheel base models get a new integrated front linkage with a higher capacity PTO, while the standard wheelbase front end loader option features a wider frame loader for improved visibility and stability.