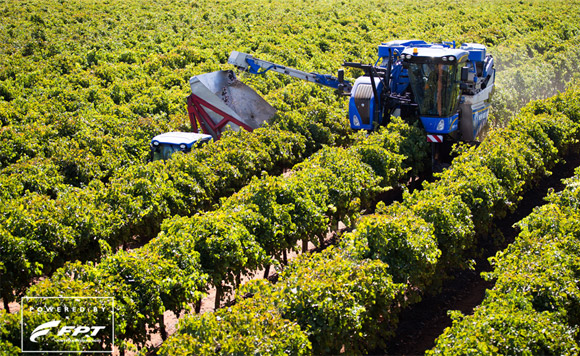 How many tonnes of grapes can be harvested in eight hours? According to the latest test, the answer is 197.6 tonnes, corresponding to nearly 200,000 bottles of Shiraz wine. This new benchmark was verified by certification company SGS and was established by FPT Industrial sister brand New Holland Agriculture using a new Braud 9090X harvester, powered by an FPT Industrial engine.

The performance test took place at the end of March in Waikerie, South Australia, on a 7-hectare Shiraz red-grape parcel. The fleet supporting the Braud 9090X comprised 5 New Holland T4.105F tractors and an Iveco Stralis 560 hp truck, all powered by FPT Industrial engines.

The FPT Industrial NEF engine used by the Braud Grape Harvester has reliability proven by the more than 1.7 million units produced since 2011. The 175hp N67, 6-cylinder, second-generation common rail engine delivers optimized combustion,  a maximum torque of 773 Nm, and maximum sustainability, complying with Tier3 emissions standards. The N67 is also best in class for oil change intervals – which are up to 600 hours – resulting in reduced vehicle downtime and improved productivity.The amount of grape collected in this 8-hour test also underlines an outstanding fuel economy: to harvest one tonne of grape only 0.99 liters of fuel were used.

The new benchmark was obtained thanks to a combination of engine performance and harvesting method: the new Braud 9090X was equipped with a destemmer for side conveyor which permits high productivity and the best fruit samples whilst avoiding MOG (Material other than Grape) contamination during transport and unloading. A method which ultimately ensures high wine quality.