John Deere entered the SCUT (sub compact utility tractor) market in 2003 with the 2210 and made a splash. These tractors were capable, had a wide range of easily attached/detached equipment, were diesel powered, and came with four-wheel drive. Sized between the largest heavy duty lawn and garden tractors and the smallest CUT (compact utility tractor), they, according to the Deere brochure, could “move a mountain one bucket at a time”, yet weren’t too large for everyday tasks such as mowing.

In 2006 Deere replaced the 2210 with the 2305 with minor improvements such as a sleek new hood, matching loader design, cruise control, and more horsepower.

The economy offering, the 1023E, is a fully capable SCUT that makes no apologies to the competition. Sporting several improvements over the 2305, the most appreciated might well be the addition of a real transmission cooler over the previous generation’s fan system. Some owners had issues with objects such as sticks breaking off blades in the fan. But it isn’t just the response to a few problems experienced in the field that is at play in this new series; Deere engineers have done a total re-think of tractor design, de-cluttering the space around the engine, the operator’s platform, and the hydrostatic transmission. At first glance, those familiar with the previous series might think this has resulted in the use of cheaper, thinner materials (more on this later). But by doing so, access to components for service and repair have improved. For example, the transmission fluid filter now sits higher in the chassis in a more protected position and the upper driveshaft connecting the engine to the transmission is now easy to grease, whereas the 2305 was difficult and the 2210 next to impossible (and not even mentioned in owner manuals). 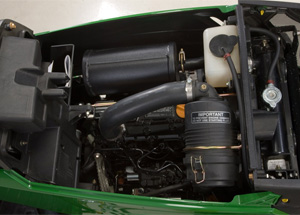 The 1023E comes with a 22.4 hp Yanmar diesel that is Interim Tier 4 compliant—that is to say the air coming out the exhaust is nearly as clean as the air going in the intake. I found the engine peppy, free-revving and with plenty of reserve power.

Two features 1000 series owners are especially going to like are the relocation of the gas tank filler cap from the high hood to the lower fenderwell and the addition of a folding ROPS (Roll Over Protection System) that is sure to save a few clearance-challenged garage door headers. And speaking of comfort, the flat, step-through operator’s platform is spacious and allows access to the tractor from either side.

The 1026R comes with all the improvements of the 1023E and more. With 25.2 hp (also Interim Tier 4 compliant) on tap, it’s hard to imagine a job where this tractor will be lacking for power. But the big news for the 1026R is the addition of position control for the 3PH (three point hitch). Position control allows an implement to be lowered to exactly the same graduated position, making the most of implements like box blades, rear rakes, and tillers. 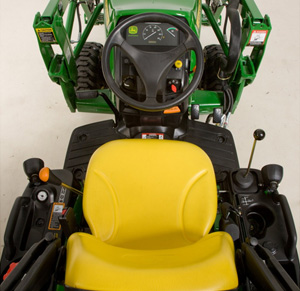 Deere has long set the standard for ease of attaching and detaching implements and the new 1000 series does not disappoint. A drive over AutoConnect mid-mount mower deck is now offered where you just drive over the deck and listen for two clicks. It’s hard to imagine an attachment system getting any easier.

And Deere’s iMatch AutoHitch system takes the grunt work out of attaching and detaching rear implements such as spreaders, tillers or mowers – even connecting the drive shaft without the operator ever getting out of his or her seat.

Ergonomics are first rate – everything is right where you want it. The twin hydrostatic foot pedal arrangement is intuitive and many feel it’s more comfortable than the treadle pedal arrangement some competitors have. And the deluxe adjustable suspension seat and tilt wheel on the 1026R (the 1023E comes with an adjustable seat) will make the smallest-to-tallest operator feel at home.

The wide side fender panels have plenty of room for your favorite beverage, as well as cell phones, tools etc. Levers for the throttle, Low-Neutral-High ranges, PTO (power take off) selection, joy stick, 4WD, differential lock, and 3PH were all easy to reach; however, it brings us to the cheapening facet. Virtually all the materials used have been reduced to the point where they appear weak and thin. I’m sure Deere engineers have done their homework, but the loader stanchions look flimsy and the joystick, while now nicely integrated into the fenderwell, looks like you could bend it while coaxing a loader bucket into action.

I found the new dashboard design to be clean and well laid out and the inclusion of a temperature gauge verses the previous generation’s idiot light a huge improvement, but each time I moved the 2WD lever to 4WD, the plastic cap covering it slipped off in my hand. As for the differential lock lever…let’s just say quite a few owners are going to find a plastic cap to slip on and cover up the cheap, unfinished look.

Cheapening comments aside, Deere, by listening to its customers, has certainly improved on a successful line of SCUT tractors. With the 1023E MSRP at $13,999 and the 1026R at $15,299, many are sure to be showing up in neighborhoods, farms and municipalities near you. But if your interest is in the 1026R, you’d better get your order in now. The dealer I talked to said the 1023E availability is 3-4 days, but the 1026R will take 4-5 weeks.