The new and improved 4600 Series 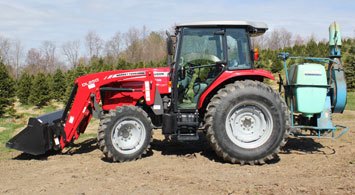 We got the first taste of the new 4600 and 5600 series tractors at the National Farm Machinery Show last February in Louisville and couldn’t wait to get behind the wheel when they first started hitting dealer stocks.

With strong demand and understandable lag in ramping up production to keep pace, finding a 4600 series tractor proved more difficult than we thought, but thanks to the good folks at Broadhead, Massey Ferguson’s marketing arm, Abele Tractor in Albany, NY, and Zema’s Nursery in Stephentown, NY, we were able to spend some time with a shiny new 4608 and get to hear some first impressions of the proud new owners.

The new 4600 series consists of three tractors, the 80-horsepower 4608, the 90-horsepower 4609, and the 100-horsepower 4610. The series is a replacement for the venerable HD series tractors, though there are differences that make a direct comparison difficult. First, the powerplant used in the 4600 series is markedly different. Whereas the HD series was powered by four-cylinder Perkins engines, Tier IV EPA emissions requirements mandated changes that could not have been incorporated to the design footprint. Massey Ferguson took the opportunity to completely redesign the 4600 series, beginning with all-new three-cylinder AGCO powerplants that make equivalent power (HD Series made 81/91/97 peak horsepower) and are Tier IV compliant without the need for particulate filtration. 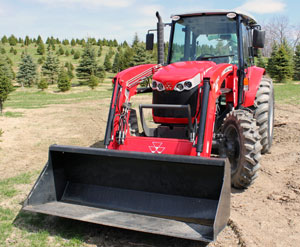 Achieving Tier IV compliance without having to go the route of particulate filtration may well be the best selling point of the redesign. Particulate filters are expensive to replace and require regenerative cycling that equates to unproductive downtime. The 33AWIC powerplant in the 4608 is turbocharged and intercooled and uses high-pressure common rail injection to achieve a rating of 69 horsepower at the power take off (PTO) at 2200 rpm. The 3.3L mill utilizes SisuTronic EEM4 engine management to keep everything in check and operating at the highest efficiency.

And while the HD series came standard with 8F/8R SynchroShuttle transmissions (a 12F/12R SynchroShuttle was optional), the 4600 series gets 12F/12R PowerShuttle transmissions, which Jim Overacker of Abele Tractor likened to moving from 80s technology to the 21st century. The transmissions have six synchronized forward and reverse gears and two ranges. Gear changes can be accomplished on-the-fly using the clutch pedal, but range changes require the tractor to be brought to a halt. Changing direction with the PowerShuttle is as simple as pulling up the left hand turn signal-like stalk and pushing it forward or pulling it back. No clutching is required and the tractor does not need to have come to a halt to reverse direction, with hydraulics doing all the work. We noted the throw on the PowerShuttle stalk was quite short, and talking to Joe Zema, who has been around tractors for the 39 years Zema’s Nursery has been in operation, all tractor controls have been engineered to have short throws which we have no doubt will be appreciated after long hours in the field.

COMPETITION: Read our review of the John Deere 6125R Tractor 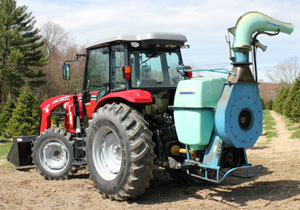 At the rear, hydraulics are run through an open center tandem pump arrangement that flows 23.6 gpm with 17.1 gpm going to the remotes. This is an improvement of 2.6 gpm over the HD series and gives the Cat II three point hitch (3PH) a lift capacity of 3,417 lbs at the industry standard of 24”. And while the lift capacity is not markedly increased over the HD series (3,391 lbs), hydraulic functions, such as loader movement, benefit with added responsiveness.

The PTO is independent and electronically engaged with 540 and 1000 rpm ranges. A nice feature (pointed out by Zema) is that disengaging the PTO only requires a tap of the yellow PTO knob. A single rear remote is the standard configuration, but up to three valves are supported. Valve choices are simple spring return to neutral (SRN), kick out (KO) and kick out and float (KO/FL). Position and draft control are standard. The lower link arms and stabilizers telescope for ease of attachment and the lower arms also feature adjustable leveling with turnbuckles. A 24V power outlet is also standard. And while we’re at it, the axle and differential are substantial with the same outstanding casting quality seen in the HD series. The rear axle is a flange type with planetary final drive. Differential lock is standard and the brakes are independent with internal wet multi-discs.

Climb up into the deluxe cab and the operator is treated to a spacious cabin with ergonomically positioned, color-coded controls. The suspended seat is adjustable for operator weight and is fully adjustable with armrests that fold out of the way and a retractable seatbelt. The steering column tilts for comfort and visual access to the automotive quality instrumentation package. Fire up the 33AWIC with the cabin door closed and noise levels are quite quiet. Our dBA meter saw average readings of 86.5 at idle, which was a little higher than the 79 dBA we measured in the HD 2660 we tested last October, but we were amazed that the new powerplant made up for the idle increase with a reading at PTO RPM that averaged only 90.3. Impressive. Another difference between the HD and the 4600 series cabs is the right side door which now opens. Zema pointed out that one probably wouldn’t use the right door to enter/exit, but it will be nice to be able to stop the tractor and talk to someone on that side.

RESEARCH: See all of our Utility tractor reviews 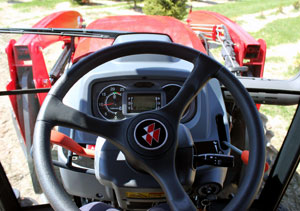 Our 4608 was equipped with the DL250 loader, which is rated to lift 3,304 lbs. The DL250 is skid-steer compatible, which opens up a wide range of attachments that can be found at rental centers. Zema’s Nursery also uses skid-steers in its day-to-day operations, so those attachments are already available. Abele Tractor outfitted the 4608/DL250 with an optional front hydraulic outlet, which is operated by thumb switches incorporated in the cabin joystick control. The nursery plans to add a grapple to help handle its tree and brush clearing needs.

After spending time in and around the tractor, which was washed and spotless for our visit (we got the feeling that the 4608 won’t look that different in a year or two, such is the care and pride of ownership evident all around the nursery), we got to ask Zema what he liked best about the 4608. The PowerShuttle was mentioned first, followed by the Tier IV compatibility without particulate filtration. Zema also mentioned the good visibility and comfort. Safety also played a large role in the selection of this tractor, where Massey Ferguson has thought of everything from a ride clutch warning to interlocks. Zema’s Nursery does a brisk business during the Christmas season with Choose and Cut, a time when their hay wagon is used to transport families and their trees. The PowerShuttle, which allows smooth, jolt-free transitioning from stop to movement, will bring an even higher degree of safety for those aboard. Zema also commented that at the 3PH stops he was easily able to set for his old sprayer so it could be kept off the ground and yet not raised to too high of a position.

The 4608 measures 150.2” long and is 100.4” high to the top of the cab. Riding on an 88.5” wheelbase, the 6,503 lb cab version is 816 lbs lighter than the HD series it replaces. With a two-year/2000 hour warranty that covers just about everything other than wear items such as tires and a five-year emissions system warranty, competitive pricing, and all the niceties we’ve mentioned and some we haven’t, the 4608 would be a great addition to any farm, estate or nursery.