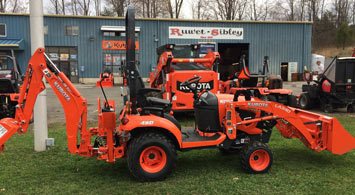 Kubota created the subcompact tractor class in 2000, delivering diesel power, 4WD, and an impressive list of compatible implements in a compact package that even novices could operate. Over the years, subtle improvements were made, each identifiable by a new nomenclature. For 2017, the changes are less subtle with the new BX80 series a near total redesign.

As with the previous BX70 series, the new BX80 series consists of four models. The entry-level BX1880 weighs 1366 lbs (tractor-only), is powered by an 18-horsepower Kubota diesel, can come with a 48” or 54” mowing deck, and has pricing (barebones) that begins under $10K. The slightly larger BX2380 weighs 1443 lbs, comes with a 23-horsepower diesel, and can come with a 54” or 60” mowing deck. For those requiring/desiring more power, the 1521 lb BX2680 comes with a 25.5-horsepower engine. The BX23S, and subject of this review, is based on the BX2380 power/platform and is a factory tractor-loader-backhoe (TLB) package.

Tractor.com was first exposed to the BX80 series last fall at the Kubota dealer meeting held in Grapevine, TX. At that time, we were told the new models would begin to hit dealer stocks in the May/June timeframe. When the good folks at Ruwet-Sibley Equipment Corp., with locations in Torrington and New Milford, Conn., let us know BX80 models had arrived, we promptly adjusted our equipment review queue. Arriving at the Torrington location, a BX2380 and a BX23S were both on hand, and though we did spend time kicking the tires of both, for this week’s review we concentrate on the BX23S.

The sole transmission offering is a two-range hydrostatic transmission (HST) controlled by a treadle pedal. Forward speed range is 0-8.4 mph, while reverse is 0-6.5 mph. Standard is a live independent PTO (mid 2500/rear 540 rpm) selectable for mid, rear and mid and rear operation. Hydraulics run through a single pump flowing 6.2 gpm and powering the power steering and implement circuits. Three-point hitch (3PH) lift capacity is 680 lbs measured at 24” behind pin, but since the BX23S is a TLB, the top and lower link arms are optional.

There are two loaders available – the LA340 (pin-on) and the LA340S quick attach (Swift-Tach). Our test tractor was outfitted with the latter, which is a curved boom design and easily attached/detached by the operator without he or she leaving their seat. The simple procedure requires the operator to raise the loader using the joystick control and cycle the bucket to full dump position, pull the stand release lever, reposition the bucket and lower to the ground, unlatch the loader stanchion hooks, lower the frame from the mast, turn off engine and relieve hydraulic pressure by nudging the joystick, then pull a single lever to detach the hydraulic lines – all without the operator having to get off the tractor! 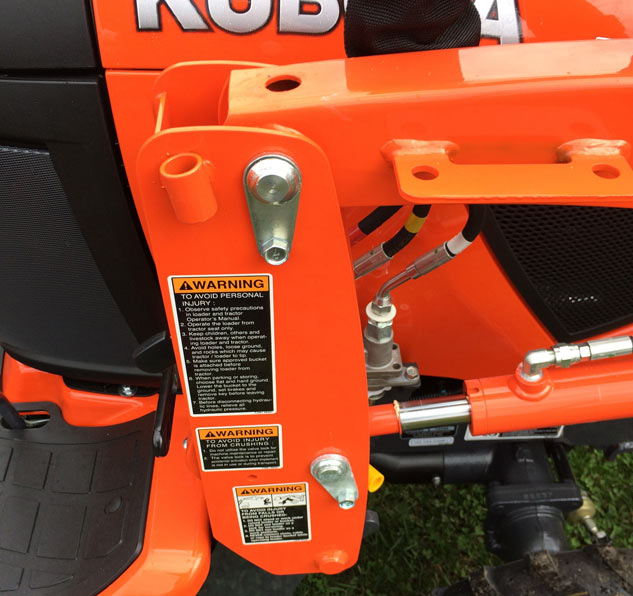 The Swift-Tach loader hoses attach as a single unit, using flat-face no-spill couplers instead of traditional pioneer couplers. This means no more drips on the garage or shed floor, a cleaner tractor frame, all-the-while helping keep contaminants from getting into the hydraulic reservoir. Lift capacity is 613 lbs (at pivot pin) to a max height of 71”. Rated cycle times (empty) are 3.3 seconds to full raise, 2.5 seconds to full lower, 2.3 seconds to full curl, and 2.7 seconds to full dump. Kubota hydraulic response at idle is snail slow, no doubt aimed at that novice operator. Cycle the engine revs up to 1600-3100 rpm (suggested range) and the BX23S will amaze at what work the tiny package can get done. A 48” bucket is standard equipment now with a replaceable cutting edge, and can be optioned with skid-steer compatible two-lever coupling/attaching system. Another nice improvement to the loader is the grease fitting caps that are sure to keep a lot of pants, shirts and easy chairs clean.

COMPARISON: Read our review of the 2016 Kioti CK2510 Cab and Snowblower

The backhoe utilized on the BX23S is the BT603 (replaces the BT602 used on the BX25) which offers a 6’1” dig depth, 8’7” reach, and 140 degrees of swing arc. Dig force at the bucket cylinder is 1936 lbs and 1171 lbs at the dipperstick. As with the DT602, a 12” bucket is offered, but now there is an option for a 16” bucket. Kubota calls the new mount system used on the BT603 Swift-Connect, and all that is required to attach/detach the backhoe is the latching/unlatching of a single lever, unhooking the hydraulic hoses with the same no-spill flat-face couplers used on the LA340S, and then backing in/driving away. A mechanical thumb is an easy to install option. We’re not quite sure why the backhoe did not have the same grease fitting caps that the loader frame had, but that’s probably due to greater clothing exposure around the loader frame when doing maintenance such as checking the oil etc. 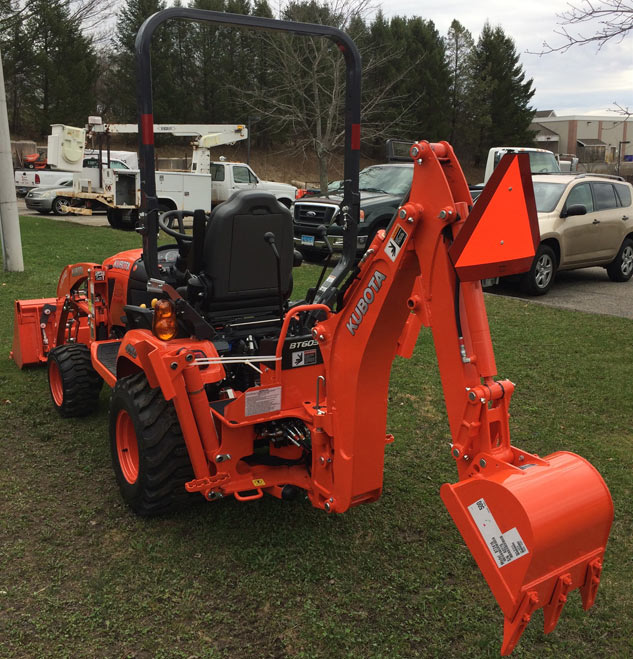 Climbing up into the operator platform, which is flat and rubber-isolated, the operator is treated to a spacious, ergonomically thought-through layout. The loader joystick now is nicely integrated into the right fender console where the fuel filler cap is located along with the 3PH rockshaft control lever. There is also an odd open slot that we are guessing would be where a rear remote lever would go. On the left fender is the PTO engagement lever which is next to the lever selecting the mid, rear, and mid and rear PTOs. There is a cup holder along with a small lidded storage container that also has a 12V DC outlet. The suspension seat is comfortable with armrests and swivels on its frame for backhoe use. A retractable seatbelt and folding ROPS hoop add to operator safety. As with the previous BX generation, the brake is located on the left side.

The dash is very automotive-like, with a backlit gauge package readable even in direct sunlight, and the steering wheel now tilts for operator comfort. Fuel, temperature gauges are analog, with warning lights for low fuel, battery, PTO engagement, etc., while an LCD pod displays engine hours. Cruise control is standard (optional on BX1880).

Circling around the tractor, we note the steel content and minimal use of plastic. Swinging the hood guard forward – probably the least hefty piece of metal used, though certainly sufficient – and the operator can open the one-piece hood, which also swings forward. The latch is now on the left top of the dash, and though the lever shows a sideward arrow, the release action is more out and up. Once the hood is open, supported by gas struts, the operator has easy access to maintenance items. 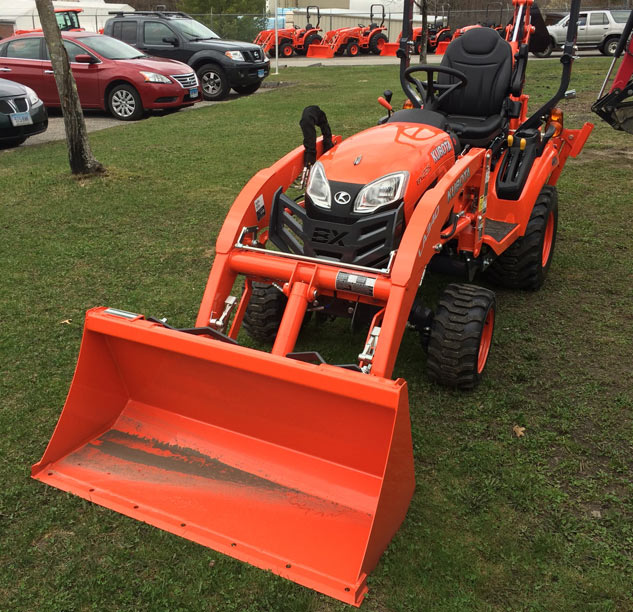 Suggested MSRP for the BX23S is $24,598 with incentives such as 0-down/0% financing for 60 months and variations for longer-terms with more as a down payment. With a two-year/1500-hour bumper-to-bumper warranty (six-year/2000-hour powertrain), a wide selection of implements enhanced by Kubota’s Land Pride acquisition, Kubota reliability, the added ease of attachment from the Swift-Tach loader and Swift-Connect backhoe, enhanced ergonomics and niceties, anyone in the market for a subcompact tractor would do well to acquaint themselves with the new BX80 series. And for those in the vicinity of Torrington or New Milford, Conn., you’ll find Ruwet-Sibley has an extensive inventory along with a friendly and knowledgeable staff.