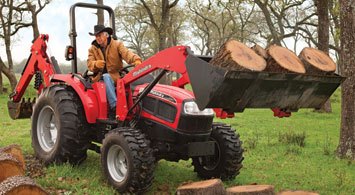 The Mahindra 35 series, a lineup of three tractors that range from the 35 horsepower 3535 to the 50 horsepower 5035, are described in company literature as the brand’s “Premium Series”. We tested the 3535 in June and came away impressed but wondered what a little more power might add to the package.

First, thanks go to a longtime MyTractorForum.com member, Hugh-SS/16 and the accommodating, friendly management at Ellington Agway who happened to have a brand new 4035 power shuttle in stock. This, coincidently, was a middle-of-range 35 series model Mahindra was encouraging us to review. With all the planets so aligned, we did a little homework and then set off for Ellington, CT.

The specs on the 4035 shout heavy-duty. Beginning with a 40 gross horsepower three-cylinder naturally aspirated diesel displacing 115.4 ci and utilizing direct injection, the 4035 powerplant sends 33 horses to the power take off (PTO) at an engine speed of 2,800 RPM. EPA Tier IVi compliance is met without the need for particulate filtration. But next year when full Tier IV regulations go into effect it will be interesting to see what changes will be required. Rigidly mounted to a cast iron chassis, output from the engine is sent to a 12F / 12R power shuttle transmission that allows clutchless direction changes. Hydraulics are open center with one pump sending five gpm to power steering needs and the other 11 gpm for implement use. With a tractor-only weight of 4,367 lbs, larger tires and more lift capacity than its 3535 sibling, the 4035 is indeed outfitted for work.

COMPARISON: Read our review of the Mahindra 3535 4WD Shuttle 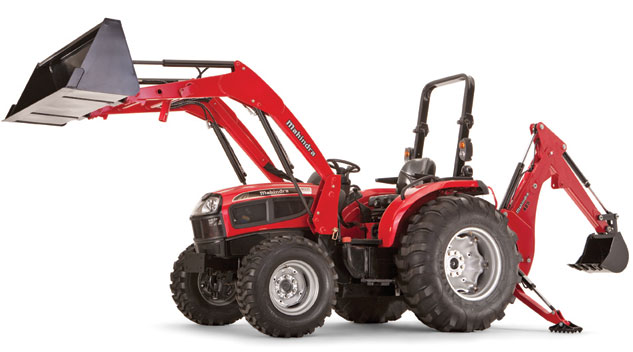 Mahindra places the shuttle control less like a fingertip turn signal stalk as some manufacturers do and more like a column-mounted shifter that is located on the left hand side. No matter, the control is intuitive and easy to get used to. Just lift the shifter lever up and push it forward or backward to get going. When directional change is required, push/pull the lever to the neutral position, lift, and then push or pull it to the desired directional position. Gear and range changes (there are four gears and three ranges) require the clutch to change, but the PTO still operates independently. And speaking of the PTO, a three-position switch with Manual, Off and Automatic detents is located on the right side of the dash. Select Manual and the operator retains full control over the PTO. Off is self-explanatory. Automatic is a mode where the PTO will shut off whenever the three-point hitch (3PH) is raised and is especially handy when using implements such as a rotary cutter.

Approach the 4035, and the size 12-16.5 front and 16.9-24 rear tubeless Industrial (R4) tires immediately grab your attention and let you know this is no 3535. Walk around to the rear and the heavy-dutiness of construction Mahindra is known for is evident. Large transaxle and axle castings are mated to equally as heavy-duty forged and fabricated linkages and it’s no surprise that the Cat-I 3PH is rated to lift 3,090 lbs. Lower link arms have telescopic ends for ease of implement attachment and the outboard stabilizer arms have quick pins for adjustment. The right arm further gets a crank adjustment to control implement leveling. 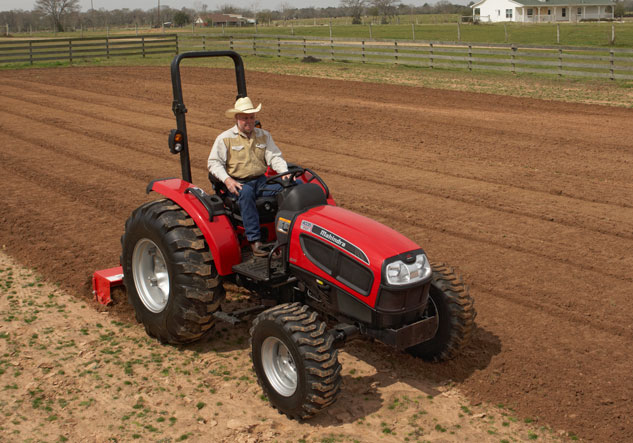 Above the large fold-up shield that protects the PTO shaft is a standard single rear remote that would be perfect for controlling a hydraulic top link. There is also a seven-pin 12V electrical outlet for a trailer hook up or powered implement such as a sprayer. Access steps are located on both sides, and though the flat platform is accessible from either side, the loader joystick isn’t integrated into the fender cowl, making access from the right somewhat tight. A small metal tool box just below the joystick is the perfect location for cinch pins or things you might wish you had extras for in the field. From the left primary access side, you immediately notice the location of the fuel tank – slightly above the footstep which is a big improvement over the hood location many competitors use.

COMPARISON: Read our review of the Bobcat CT235 HST

Slipping into the deluxe high-back seat with armrests, weight and backrest angle adjustments and we had to chuckle. Yes the seat is comfortable. Yes it is deluxe. And yes it does have a rain drain hole. But water still collects in the molded crease cavity. Guess how we found that out? Anyway, with the adjustable weight feature, the seat cannot tip forward, so you might want to keep a rag or sponge in that toolbox as well.

Space between the fenders (metal of course) and seat is quite good with more than enough room on the left for the range shift and 2WD/4WD levers and even an operator’s thick hand. The operator’s right side is equally as roomy and is where control levers for the 3PH (position and draft) are located, along with a lever controlling the rear remote. Pedals for the clutch, tilt steering wheel, split brakes, foot throttle and right heel actuated differential lock are all suspended so the platform is truly unobstructed. The instrument panel is a five-gauge cluster with analog temperature, fuel level, battery and oil pressure dials surrounding the tachometer. Gauges are white with black increments and orange indicator needles for easy visibility even in direct sunlight. The right fender has a small closeable storage tray and cupholder while the left fender has a larger cupholder suitable for even a big gulp.

Our test tractor was outfitted with Mahindra’s curved boom ML120 loader which is a quick attach design and skid-steer compatible. Rated to lift 2,400 lbs to a lift height of 106”, the ML120 comes standard with a 72” wide bucket. Raising the boom quickly we detected a slight nervous twitch from the operator seat. Speaking to Matt Person, son of the dealership GM of 30+ years and the service manager, we were told the 4035 had not yet had the tires filled. Since the 3535 we tested in June came with the same loader and we detected no twitchiness (the tires were loaded) we’re confident the 4035 with its larger tires would be at least as stable if not more so after the larger tires were filled. Loader response was quite good, with full raise taking 4.9 seconds, full lower 4.1 seconds, dump 3.8 seconds and curl 3.0 seconds. Dump clearance is 85” so the 4035/ML120 combination will certainly clear most pickup truck beds or trailers. 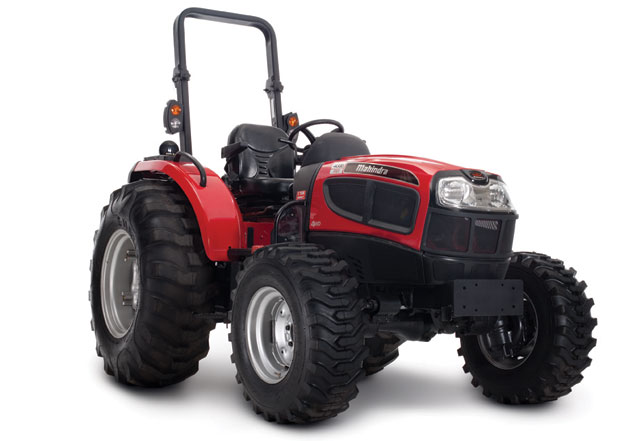 We asked Matt what he thought were the best selling points of the 4035. His answer covered the heavy-duty construction, the power shuttle transmission, ergonomics that ranged from the fuel tank filler location to the cockpit controls, the standard rear remote, tie down hooks that were suitable for even chains, the rear work light, larger tires, and the reliability they have experienced for the more than five years they have carried the Mahindra line.

COMPARISON: Read our review of the Yanmar Lx4100 HST

Matt truly knew his stuff and we came away impressed at how this was quintessentially the kind of dealer Mahindra’s Cleo Franklin referenced in our March How To Shop For A Tractor series. If you are in the market for an ultra competitive and capable 40 HP tractor, you owe it to yourself to check out the Mahindra 4035. If you’re in the Ellington, CT area, we’d recommend you check out Ellington Agway.