Gleaner harvesting history begins with the Baldwin brothers, George and Curtis, who built and marketed the first Gleaner combine in 1923. That first self-propelled combine was mounted on a Fordson tractor and could cut an acre of wheat for every mile of travel. The Gleaner Manufacturing Company became a reality in 1925, and led the way with a number of firsts, including augers that replaced canvas drapers, a rasp bar threshing cylinder instead of a spike-tooth arrangement, and a down front cylinder that put threshing closer to the crop.

Along the years and against such times as the Great Depression, GMC ownership became a genealogy of its own. First, investor groups, then Allis-Chalmers and Deutz-Allis, finally to be folded into the AGCO Corporation in 1990 and where it is to this day.

Not to be overshadowed by the technology improvements employed in today’s combines, it was the introduction of the transverse-flow rotary system in 1979 that really charted the path to where Gleaner is 91 years later. The transverse-flow rotary system combined reaping, threshing, and winnowing in a way vastly different than competing machines. And to this day, nothing rivals the natural flow of crop offered by the Gleaner transverse rotor system.

Anyone who has met Kevin Bien, Brand Marketing Manager for Gleaner, will understand when we say, it’s hard to imagine someone more enthusiastic about their job and what their product can do. Our interview was scheduled for 11:00 am at the Farm Progress Show held in Boone, IA, but due to an aircraft mechanical issue, was gracefully accommodated in accelerated fashion near show closing time. Bien summed up the combine’s mission simply as to be a platform that’s flexible and reactive to conditions and able to put the best grain in the bin with lowest level of loss. So how does the Gleaner system accomplish that and what separates it from competing systems? Read on to learn more. 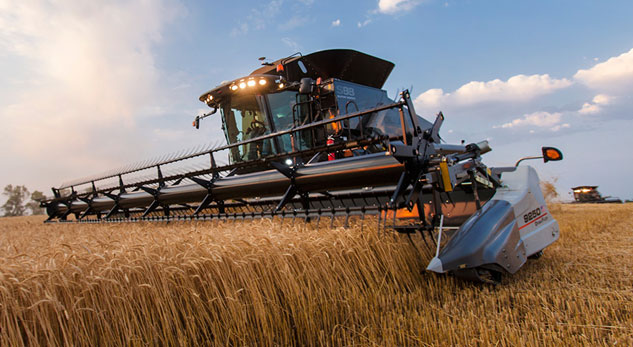 The Gleaner S8 Series consists of three combines, the Class 6 S68, Class 7 S78 and Class 8 S88. AGCO’s 8.4L six-cylinder AWF engines power the S68, while 9.8L AGCO AWF seven-cylinder engines do duty in the S78 and S88. Rated horsepower is 322 in the S68, 375 in the S78 and 430 in the S88. Boosted horsepower for those challenging conditions can rise as much as 76 in the S68 and S78 and 41 in the S88. And for 2015 models, EPA Final Tier 4 (FT4) emissions compliance is achieved through Selective Catalytic Reduction (SCR), dual turbochargers, and external-cooled EGR – bypassing the need for heat-generating diesel particulate filtration (DPF). Expect these engines to run cooler and last longer.

Power from the AWF engines is sent to a choice of two transmissions, four-speed with single speed hydrostatic or the optional four-speed with two-speed hydrostatic. Choose the optional XR two-speed hydro and expect better climbing ability on hills and on-the-go shifting through a convenient rocker switch located on the right hand console. Select Low and ground speed is reduced while torque is increased 30%. Select High and ground speed increases by 30%.

Frame construction on the S8 Series is also worthy of mention. Gleaner is the only combine manufacturer utilizing a full welded unitized frame. This solid, stable foundation results in straight-through shafts not requiring 90-degree gearboxes. Losing the complex and heavy gear reduces combine weight, lessens maintenance requirements, increases fuel efficiency, and allows more engine power to go to threshing. Comparing the S88 to competing Class 8 platforms and weight savings can range from 8,200 to almost 17,500 lbs. This can mean as much as 32 hp is saved while the combine impact on ground compaction is measurably reduced.

Those advantages begin with Gleaner’s Perforated Cascade Pan, which has been opened up an additional 992 square inches and slanted at a 6-degree angle. The additional cleaning capacity offered allows high moisture corn and crops to fall through sooner and reach the sieve and clear the grain cross auger faster. Improvements to the pan have increased capacity by 10% while resulting in lower losses and even cleaner grain to the tank. Elevator speed has also been increased, increasing productivity by 6% over the existing 5,000 bushel/hr. (dry) system used by Gleaner. And for wheat and other small grains, the standard concave filler plates increase threshing performance. For operations requiring maximum performance in grass seed and sunflower-like specialty crops, a new separator blanking kit is available along with a perforated elevator door that makes harvesting soybeans in sandy conditions a much cleaner operation.

From the operator’s cab, where 61.2 cubic feet of glass and 121.4 cubic feet of cabin volume reside, there are two seats available – the standard high-back air ride cloth seat and the optional high-back air ride seat that is heated and cooled. As expected, the steering tilts and telescopes, while in-the-field operations are improved by a new steering control unit in conjunction with steering cylinders that have been increased from 150 to 200 cc. And quiet it is, beginning with the way the Gleaner processor sits further back in the machine vs. positioning in an axial combine. This means no noise resonating up underneath the processor that is taking in the crop. New laminated glass technology also gets some credit for the further dBA reduction in sound accomplished in the Cleaner S88 cab. 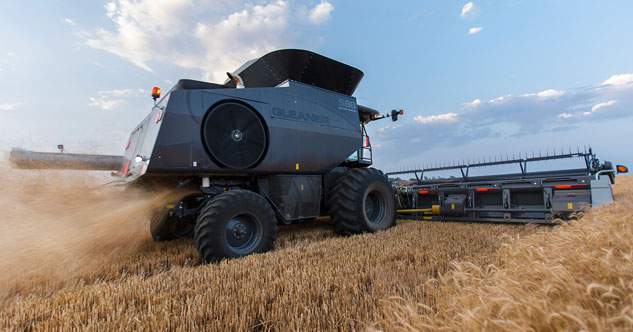 Other improvements come at the header, where Gleaner is working with Reichhardt allowing their row sensing system to work in conjunction with the System 150 Auto-Guidance system from AGCO. For a $6,195 investment, expect more precise row sensing, increased productivity and better accuracy. And it can’t go without mention that Gleaner’s SmartCooling fan that alters pitch and reverses automatically every 15 minutes in what Bien calls “Puff the Magic Dragon”. This technology received the AE50 Award from the American Society of Agriculture and Biological Engineering at the National Farm Machinery Show in 2014. SmartCooling cleans radiator fin buildup and then varies the fan pitch to clean the engine compartment, saveing 66% of engine horsepower over a fixed fan. Think that fan doesn’t require much horsepower? Wrong, it takes 55 hp to run a fixed fan.

Gleaner S88s come with 230 gallons of onboard fuel capacity, a 24.5-gallon DEF tank, have a 120” standard tread that increases to 145” when reversed, and a steering axle that is adjustable from 119” to 143”. Electronics include the abovementioned Reichhardt/AGCO System 150 and AutoGuide 3000. And AgCam offers optional video monitoring – up to four can be displayed.

For a farm operation in search of a fuel efficient combine that puts the best grain into the mix and offers a horsepower-to-weight ratio that puts more of that power to threshing with less ground compaction, the Gleaner S88 is well worthy of consideration.