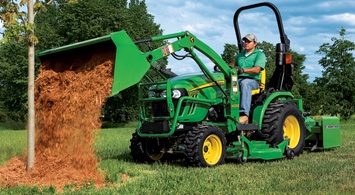 John Deere’s move to a unified numbering system, where the family is identified by the first digit with the horsepower and trim levels following, has been applauded by both users and the press. In the case of the 1 Series, the tractors are subcompacts. 2 Series are small-frame CUTs. 3 Series are mid-frame CUTs. 4 Series are large-frame CUTs. And 5 Series are utility tractors (UTs).

Horsepower is horsepower, but trim levels can still be a bit confusing. John Deere first came out with E designated, or economy, tractors with models such as the 1023E and 3038E. These tractors offered substantial performance, but to keep costs down, some features had to be omitted. Likewise, John Deere recently introduced M (also economy) designated tractors starting with the 4M family. But for those that wish for all the bells and whistles and comfort enhancing niceties learned over 177 years, R designated tractors are where it’s at. 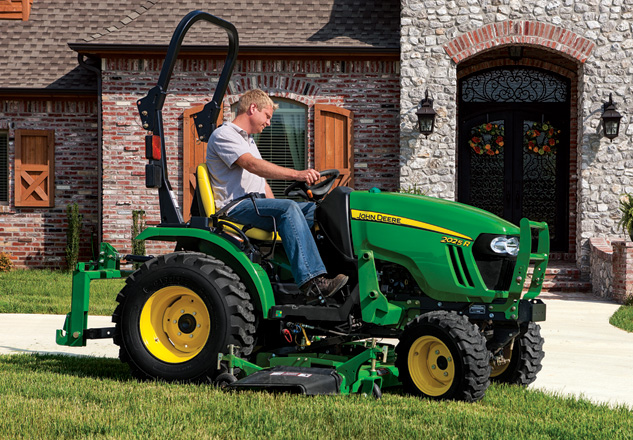 The subject of this test is the entry level 2025R which replaces the time tested and proven 2320. Don’t be fooled by entry level, though, as this is a no compromise, fully-equipped CUT. Beginning with the engine, not surprisingly a Yanmar, the 3TNV76 makes 24.2 gross horsepower (round upwards and you get the 25 of the 2025R) at a low 2500 rpm. The 1.115L mill achieves EPA Tier 4 compliance without the need for diesel particulate filtration (DPF) and is rated to deliver 18 horsepower at the power take off (PTO). Output from the powerplant is delivered to the ground through a Kanzaki hydrostatic transmission with two gear ranges. As with the 2320 we tested in Oct. of 2012, the gear ranges are radically different than those used in 1 Series tractors. Low range delivers all the grunt you would need for ground-engaging activities, but with enough speed to mow. High range delivers usable transport speed with enough grunt to mow, perhaps in any condition save substantial slopes.

Hydraulic output is run through a gear driven twin pump arrangement that flows 2.2 gpm to the power steering system and 3.4 gpm to implement needs (5.6 gpm total). And while the flow rate might seem a bit low when compared to 1 Series machines, the operating PSI is much higher (2421 vs. 2000), resulting in a three-point hitch (3PH) lift capacity of 1,150 lbs to the industry standard of 24” behind center link. As expected, position control is standard fare and the hitch rating is full Cat-I. 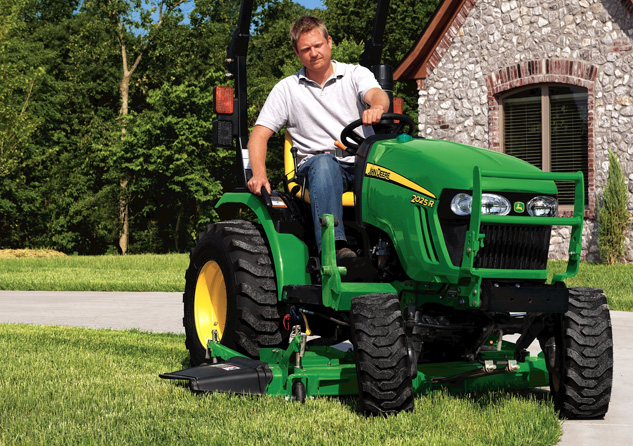 Operator control over the hydrostatic transmission runs through a twin side-by-side pedal arrangement that is among the best in the industry, though as we mentioned in our 2320 review, the new pedal position does require more foot movement than in the previous generation’s setup. Getting behind the wheel and that becomes a trivial matter; full intuitive modulation over the entire forward and reverse speed range is the end result. And behind the wheel, John Deere ergonomics are first rate. Beginning with the levers and controls which are differentiated by color with mechanical and hydraulic interfaces in black and transmission-driven (PTO) interfaces in yellow, the operator’s hands and feet seem to interact with controls at the perfect location. Both tilt steering and cruise control are standard.

COMPARISON: Read our review of the 2014 Mahindra Max 24 HST

The one negative, in our estimation, is a feature we’re forced to get used to. Reverse implement operation (RIO) is a result of lawsuits that have forced manufacturers to come up with systems protecting the unsuspecting from harm by negligent operation of a tractor while reversing with the PTO engaged. While we would never wish harm to anyone, these systems become nuisances that in no way ensure an operator looks rearward before backing up. Both 540 rpm rear and 2,000 rpm mid PTOs are standard equipment on the 2025R. 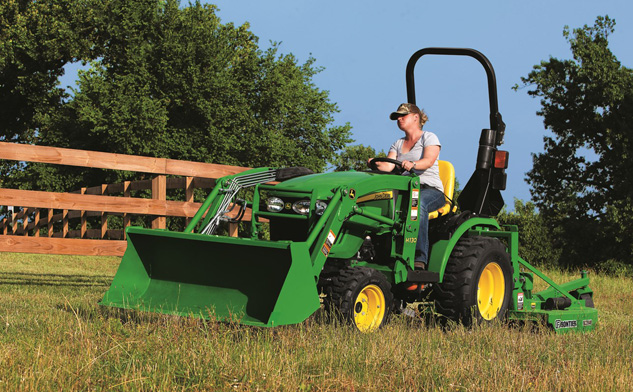 John Deere engineers have long paid attention to the ease of operation, which includes the ease of attaching/detaching implements. For the 2025R, some of those operating enhancements include On-Ramp drive over decks, iMatch quick hitches, iMatch auto connect (PTO) hitches, and a quick park loader with quick attach bucket options. 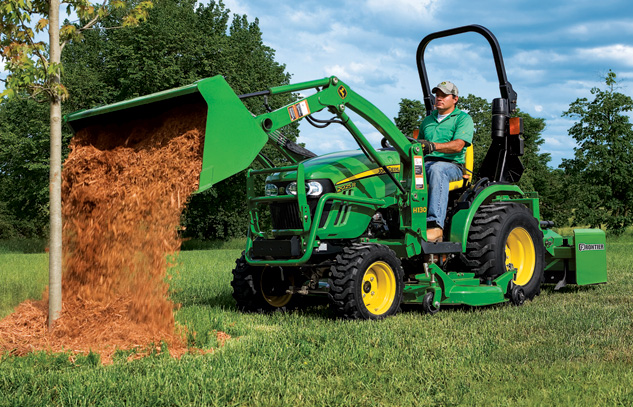 A model 270a backhoe is also available. As with other John Deere backhoes, the 270a can be operated at idle, which is perfect for beginners to get used to digging with less chance of damage to adjacent objects. The system is sub-frame based and allows a mid-mount mower to be attached at the same time. Another nice feature is that the tractor’s 3PH arms can remain attached while using the backhoe. The 270a comes with improved feel and feathering, pivot seat that can be adjusted horizontally and vertically to operator preference, and can be outfitted with 8”, 12” or 16” buckets.

COMPARISON: Read our review of the 2014 Massey Ferguson 1734E HST

John Deere gives the 2025R a two-year bumper-to-bumper warranty with extended powertrain coverage to three years. Notable options include factory cab, additional lighting, engine coolant heater, and rear fender extensions (dare we say fender flares?). For anyone in the market for a subcompact tractor such as the 1 Series but liking the idea of larger tires and more hydraulic response, the 2025R is a worthy contender. With a MSRP of tractor-only at $15,348, the 2025R offers a lot of tractor, features, and comfort for the price.