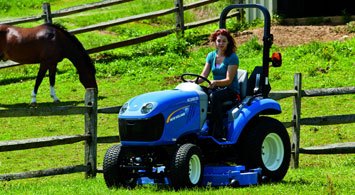 For homeowners to hobby farmers, New Holland Boomer 20 and 25 models are advertised as ultimate power tools. After our time testing the Boomer 25, we’ll have to agree.

The Boomer 20 and 25 share the identical platform and underpinnings and are built by LS Tractors to New Holland specs with the only exception between the two being the engines – the Boomer 20 gets an 69ci Mitsubishi powerplant making 23 gross and 16.5 horsepower at the power take off (PTO) and the Boomer 25 gets an 80ci engine that ups the ante to 27 gross and 19.9 PTO horsepower. As with the larger Boomer 3045 tractor we tested last October and the Boomer 40 in January, the diesels powering their smaller brothers are quiet, smooth running and nearly smokeless even under extreme load. Given the model designation S3L2, the Boomer 25 three-cylinder engine delivers its rated power at 2700 rpm and can run on standard fuels or B2 biodiesel. It’s also compliant with Tier 4a emissions requirements. A glow plug for cold starting is standard and a 6.6 gal. tank makes sure the Boomer 25 can run for a long time between fill ups.

Power from the SL32c powerplant is sent via shaft drive to a two-range hydrostatic transmission with control over speed and direction by a treadle pedal. As acknowledged in past reviews, this isn’t our preferred method of control (why didn’t New Holland stick with the slick twin side-by-side pedal arrangement of the larger Boomer tractors?), but it delivers well modulated and infinite control over the 0-9.4 mph forward and slightly less speedy reverse range. New Holland has also chosen to angle the orange treadle on a slight angle with the front forward portion further right than the rear. This allows the operator to use the pedal in a traditional fashion – toe pressing the front of the pedal to move forward/heel pressing the rear of the pedal to move in reverse – or slipping the toe under the front of the pedal to lift and reverse direction.

The transmission pump flows 2.9 gpm to the power steering while still leaving 6.0 gpm available for implement functions (8.9 gpm total). That implement flow reserve makes for a three-point hitch (3PH) lift capacity rated at 1433 lbs, though at an albeit less conservative ball end position rather than the 24” behind lift arm rating most of the industry uses. A joystick control over the hydraulics is standard and integrated into the right fenderwell. While we applaud the angling of the treadle to make easier the abovementioned pedal control options, the location of the joystick rubbed on the right leg/knee of some of our testers. That said, even those with more lanky legs never found the positioning uncomfortable – they just always knew where everything was. A single power beyond rear hydraulic outlet is a dealer-installed option.

Behind the wheel, our testers found the operator’s platform to be well designed, uncluttered (with the possible exception being the treadle/joystick positioning), functional and comfortable. When we call the Boomer 25’s operator platform uncluttered, we really mean it. The dashboard consists of a steering wheel (non-tilting), a switch for the headlamps/turn signals, and a smallish though quite readable display with a digital info center including the tachometer, hour meter and analog gauges for the fuel level and temperature.

The right fenderwell gets a yellow PTO switch, yellow-handled PTO selector (front/mid and front and mid), and black lever that controls the 3PH and a recess for keys etc. That’s it. The left fenderwell is nearly as Spartan with a red lever for Low-Neutral-High speed ranges, a black lever for 2WD/4WD, and a cup holder that that we thought was positioned a little far rearward (think hip location).

New Holland put the brake pedal where it should be on a hydrostatic tractor: on the left floor with the differential lock pedal just rearward closer to where the operator’s heel falls. Unlike some of the competitors, cruise and a mid-PTO are standard. So is a 50amp alternator that ensures plenty of juice to power factory lights and those some will want to add for better nighttime illumination (the factory set up will be bright enough for most). A step and grabrail on the left side will be appreciated but aren’t replicated on the right. The seat adjusts fore and aft and comes with a spring suspension that was quite comfortable, despite lacking an operator weight adjustment.

Our test tractor was equipped with the 235TL loader which is quick attach/detach and rated to lift 1034 lbs to 80.7”. With 6.0 gpm of hydraulic flow driving loader cylinders it was not surprising to find response crisp and quick. The bucket, however, is not of a quick attach/detach design and isn’t skid-steer compatible. A backhoe is available, as are implements including a mid-mount mower and a snowblower. Though we didn’t get to test these, we have no doubt they would perform well.

At the rear, the Boomer 25 comes with a heavy-duty drawbar, a protected PTO shaft, and a Category-1 3PH that has turnbuckles inside the lower arms to snug everything up.

Nits? Not many. We’d like the bucket to be quick attach/detach and be skid-steer compatible with the joystick mounted a bit closer to the operator and not his/her knee/leg. A three-range hydro is always on our list as is position control over the 3PH. And speaking of the 3PH, it would be nice if the lower arms had telescoping ends. We’d also like to see the loader hoses from the couplers to the loader stanchions to be a bit more protected.

The Boomer 25 rides on a 59” wheelbase and is 103.6” long and 85.5” tall to the top of the ROPS which is foldable. Weight is a substantial 1702 lbs. R3 turf or R4 industrial tires are factory choices. New Holland backs up each Boomer tractor with a five-year warranty (the first  two years are bumper-to-bumper while the balance is powertrain only). Available in a tractor-loader configuration for about $16,000 cash (financing incentives are available), the Boomer 25 just might be that ultimate powertool your garage is lacking.